Review: ‘Doctor Who the Movie’ 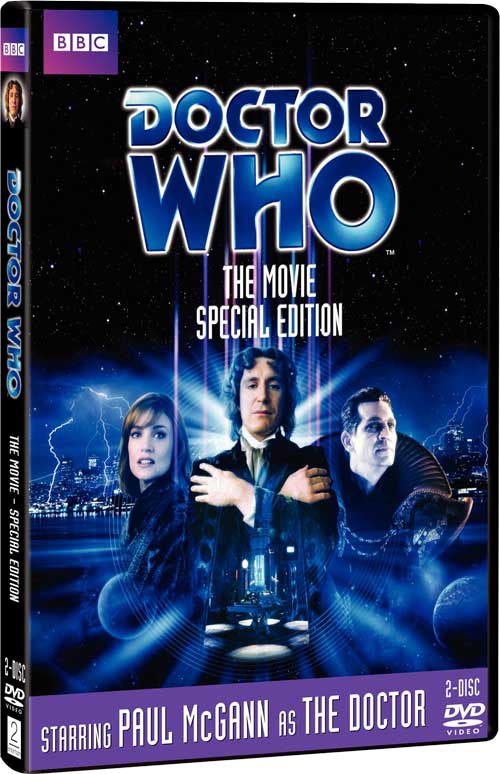 When I tweeted that I was watching [[[Doctor Who the Movie]]], it provoked a spirited debate over the film’s merits. Apparently, the Paul McGann incarnation of the Doctor is beloved by many but far from all. Truth be told, I am a latecomer to the cult of The Doctor, arriving during the new series of adventures. I certainly know the history and previous incarnations but had never developed a taste for it. So, coming to his American telefilm from 1996 after the current era, gives me an unqiue perspective.

When Fox ordered the pilot film for a hoped-for series, they received the official blessing of the BBC plus the cameo participation of Sylvester McCoy, who was the previous incarnation when the series was finally canceled in 1989.

As discovered on the very detailed documentary accompanying the movie, the film took years to finally get made. And here’s the problem. While everyone involved dearly loved Doctor Who, notably Producer Philip Segal, and all desperately wanted to make a new series, no one seemed to possess a clear idea or vision of what it should be. Without that spark of creativity, the resulting film felt like Doctor Who, even looked like Doctor Who, but lacked the crackling fun and off-kilter storytelling that had been the series’ hallmark dating back to the beginning.

Additionally, the film had to stop and explain everything given that Doctor Who was new to the vast majority of Americans. As a result, the pacing has to adapt not only for American commercial breaks but stop to explain everything from the concept of a Time Lord to what a TARDIS can do. In many ways, the movie is a primer to the Doctor as he gains a companion, regenerates, fights The Master, and saves Earth from utter destruction. While not quite a cookie-cutter approach, it feels that way in watching the movie. Fox seemed to cool on the concept, dumping it on May 14, 1996, too late for pilot season and the DOA ratings didn’t help.

You can decide for yourself now that BBC Video has this week released Doctor Who the Movie in a two-disc Special Edition DVD. Disc one is the film, uncut, and with special features while the second disc is filled with features for the true Whovian. 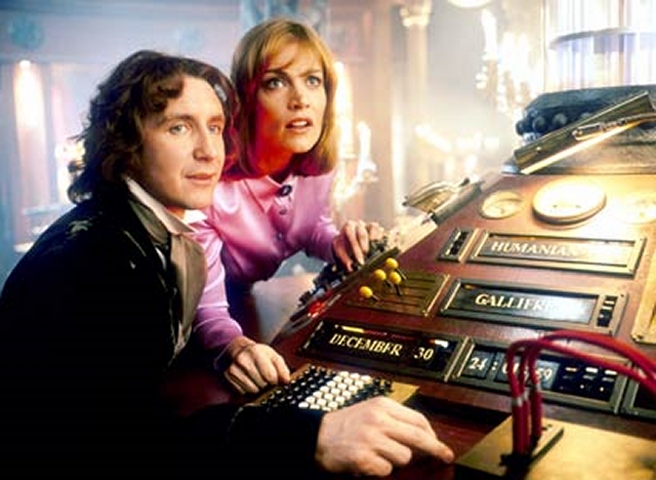 Written by Matthew Jacobs and directed by Geoffrey Sax the film feels
like an American production, shot on film, with some nice special
effects. The problem is that the film feels like an American
interpretation rather than a straight reincarnation of the beloved
franchise. McGann looks like the Doctor (given his previous
incarnations) and has that interesting self-discovery after regeneration
that helps establish his unique personality. But watching him deal with
Dr. Grace Holloway (Daphne Ashbrook), there’s no crackle of insane
energy that you expect. Holloway is one of the more mature and
accomplished companions, and is a precursor in some ways to Martha
Jones, but the relationship between the two is oddly unformed.

Jacobs connects the dots as he takes us through the Doctor’s universe in
a fine manner, but the dialogue and pacing is dour, lacking in the
humor that helps leaven the Doctor’s escapades. Even the Master (Eric
Roberts) is over-the-top as you would expect but it falls flat either
through performance or dialogue – take your pick.

The revelation that the Doctor is half-human apparently pissed off the
fans but the expanded tour through the TARDIS was welcome thanks to an
American budget. Its redesign also proved long-lasting, influencing the
current version seen today.  In the end, it was close but ultimately
unsatisfying interpretation of the characters and universe.

The 54 minute documentary laboriously takes you through the lengthy
gestation process as many of the principal players appear on camera. The
second disc contains some fun footage of McGann’s audition, SFX tests
and production art. There’s a great piece showcasing how [[[Blue Peter]]],
the long-running children’s show, kept the Doctor’s memory alive
between McCoy’s 1989 final appearance and Christopher Eccleston arrival
in 2005. Comics fans will appreciate the featurette on the comic strip
and comic book escapades of the eighth Doctor as well as acknowledgement
of the novels and audio adventures, noting that several people
including Russell T. Davies worked on the material during this fallow
period. The movie also comes with fresh commentary by McGann and McCoy
along with the original commentary from Geoffrey Sax.

For those who love all things from Gallifrey, this is a wonderful
collection. For the more casual fan, there may actually be too much here
considering how short-lived this incarnation proved. While I found it
interesting to watch, I was bothered at how weak and overly familiar it
all felt.