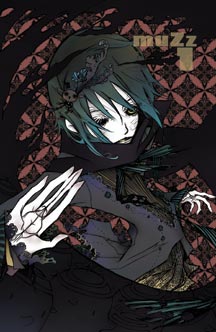 There’s a train that runs to MuZz – or, at least, it’s supposed to – carrying ideas and thoughts whose creators have lost interest in them. They’re all pretty odd and motley, as you might expect: a black whale, a phantom cat, and things I couldn’t even begin to describe.

But, on this particular train, there’s also a figure that looks like a teenage girl missing an eye. She’s Modorelin Farllee, she’s an actual human, and she’s not even dead. (Well, I don’t think she’s dead, but I don’t want to be too definite about any plot points concerning [[[MuZz]]].)

Farllee remembers nothing of her past, and wakes up on the train in such a frantic, grouchy mood that she shakes her elf guide to death and has to rely on the standard pamphlet and the advice of her fellow passengers to figure out what’s going on.

And so she quickly learns what I’ve just told you – she doesn’t believe that she’s actually a figment of someone else’s imagination, but she can’t prove that, and drops the subject. None of them are precisely sure what will happen to them in MuZz, but, for nearly all of them, it has to be better than their previous lives.

Then they suddenly find themselves falling, in the first of what will be many jarring transitions – some of which I was able to make sense of and some of which just went by me.

But let me back all the way up to the beginning, because I suspect you’re even more confused than I am. You’re wondering things like “What’s MuZz, anyway?” and “Exactly what kind of story is this?” Unfortunately, I can’t exactly answer those questions, since they’re not all that clear to me after finishing MuZz, Vol. 1.

MuZz feels in some ways like an afterlife fantasy, particularly in the early chapters with the figments, but Farllee leaves them behind about halfway through the book – actually, there’s another bewildering transition, and the narrative is suddenly about a bunch of other people somewhere else, and Farllee is there.

Once the supporting cast changes, MuZz turns more into a story about intrigue and secrets among the (magical?) elite of the city of MuZz, complicated by multiple levels of dream and reality and two guys named Edward.

MuZz is another convoluted, pseudo-Gothic story from Slave Labor, something with a vast, detailed internal cosmology and history that’s mostly hidden at this point. The creator styles herself FSc – her full name is Foo Swee Chin, which might drive me to use initials, too – and she’s got an expressive line (sometimes too expressive) and a story just burbling out of her.

I’m probably not the audience for this; I’m older than I used to be and I never did smoke above eye level or dress all in black. But MuZz is definitely a unique, idiosyncratic story, and readers willing to stretch will find a lot of fascinating stuff here. (And, to help make your mind up, there’s a preview on SLG’s website.)