Intrigue, Espionage, and Danger are primary parts of one of the most enduring genres in modern fiction to date- the Spy Novel.  And now Pro Se Productions, a leading independent publisher of Genre Fiction and New Pulp enters into this dynamic field with the latest work from noted author Aaron Smith- NOBODY DIES FOR FREE! 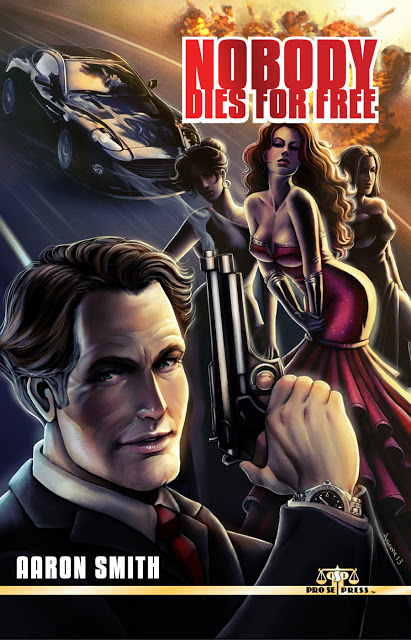 Known for his thirty published stories in multiple genres as well as his work with a wide range of characters, including Sherlock Holmes and Allan Quatermain, Smith adds one of his many own original characters to his writing resume- Richard Monroe.
“I first became aware of the spy genre,” Smith states, “as I suspect many people did, through the James Bond movies. I must have been six or seven when I saw my first one. I became a big fan of those movies and eventually of Ian Fleming’s Bond novels too. As the years went on, I came to enjoy other spy fiction as well, some as fun and occasionally over-the-top as Bond or Mission: Impossible, some much more serious, like the novels of John Le Carre, and some in-between the two extremes, stuff like the Jason Bourne movies. Having long had an interest in that type of story, I suppose it was inevitable that I’d eventually write my own.”
In NOBODY DIES FOR FREE, Richard Monroe wants nothing more than early retirement and a peaceful life in Pairs with the only woman he’s ever truly loved after years of loyally serving his country in the CIA. But when an assassin’s bullet takes his happiness away, Monroe embarks on a quest to find the man responsible for the tragedy. Monroe is soon recruited back into the clandestine services, but with a difference.
Now a lone agent reporting to a supervisor so mysterious that the official agencies don’t even know he exists, Monroe will deal with situations too delicate and too dangerous for the CIA or FBI to handle.  On his first assignment, he discovers a connection between the mission and the criminal mastermind behind his wife’s killing. Business becomes personal again and Richard Monroe sets out to teach his enemies a brutal lesson: Nobody Dies For Free.
Featuring a stunning cover by Ariane Soares with Fitztown and formatting and design by Sean Ali as well as Ebook formatting by Russ Anderson, NOBODY DIES FOR FREE presents a brand new spy to fiction that, while bearing similarities to other literary brethren, clearly stands on his own merits.
According to Smith, “He has certain similarities to James Bond and many other fictional spies: he’s handsome, brave, sneaky, ruthless, and enjoys the company of beautiful women. But he’s his own person too. He rarely uses clever gadgets and is more likely to rely on just his wits, his gun, his car, and a cell phone. He’s American, though his personality has also been shaped by the time he’s spent in many parts of the world. He doesn’t work for a large organization like the CIA or FBI, although he used to. Now he’s much more a solo agent, taking on missions too secret or sensitive for the more official agencies.”
NOBODY DIES FOR FREE is available via Pro Se’s own store at https://www.createspace.com/4313190 , at Amazon at http://www.amazon.com/Nobody-Dies-Free-Aaron-Smith/dp/1490367586/ref=sr_1_1_title_0_main?s=books&ie=UTF8&qid=1371695305&sr=1-1&keywords=nobody+dies+for+free , and through Barnes and Noble in print at http://www.barnesandnoble.com/w/nobody-dies-for-free-aaron-smith/1115568615?ean=9781490367583 for $15.00!
Smith’s Spy Novel is also available as an ebook for only $2.99 for Kindle at http://www.amazon.com/Nobody-Dies-for-Free-ebook/dp/B00DC6GVJI/ref=sr_1_1_bnp_1_kin?ie=UTF8&qid=1371871720&sr=8-1&keywords=nobody+dies+for+free, on the Nook at http://www.barnesandnoble.com/w/nobody-dies-for-free-aaron-smith/1115568615?ean=2940016651040, and for most other digital formats at
https://www.smashwords.com/books/view/325514 !
NOBODY DIES FOR FREE by Aaron Smith from Pro Se Productions!  Available now!