Barefoot In The Dark, by Dennis O’Neil 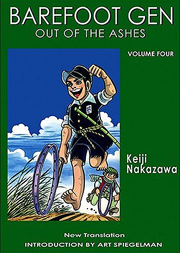 I don’t know when I first saw an English edition of Barefoot Gen. It was probably sometime in the mid 70s, when I was editing for the modest enterprise that has become the mighty Marvel Entertainment. In those days, a lot of stuff crossed editorial desks and we read most of it, if not all. So: Japanese comics? Sure, I’ll give it a look. It was probably my first experience with manga and I remember feeling a mild taste of cognitive dissonance – a perceived disconnect between subject and form. (I am choosing to ignore, because it’s a bit off-subject, the hybrid of cartooning and illustration that’s most superhero art.)

The subject was grim. Barefoot Gen is the autobiographical tale of a child who witnessed and survived the atomic bombing of Nagasaki. But it was presented in a visual style I would have described as “cartoony.” Like most American pop-cultch consumers, I associated bright, simple, exaggerated drawings – cartoons – with material that was at least supposed to be humorous, and there was nothing remotely funny about Barefoot Gen. It was, and is, a powerful anti-war document and, because it is that, deeply humane.

It’s creator, who did both art and copy, is named Keiji Nakazawa, and Barefoot Gen is his story. He had this to say about it: “People should be told what happened. If you live through something like the A-bomb, you know that war is too horrible not to be avoided at all costs, regardless of the justifications offered for it.”

The work first appeared in 1972 as a serial in a mass market Japanese publication, Shukan Shonon Jampu (and perhaps some kind reader will translate that for us). Later, it migrated to smaller magazines, and later still, it was published in English as a paperback book series. The most recent English iteration appeared in 2004, with an introduction by Art Spiegelman.

And although I haven’t read this particular edition, I feel safe in proclaiming it this week’s Recommended Reading.

Keiji Nakazawa’s message is one we’ve all surely heard before, but it bears repeating and repeating until the world finally heeds it, and it especially bears repeating in an election year that is marred by inexcusable violence abroad. As for his method: I’m not sure that cartooning, with its plasticity, expressiveness and simplicity – qualities not often linked in so-called “fine art” – is not a good medium to represent something “too horrible not to be avoided at all costs.”

And speaking of fine art, and abruptly changing tone and subject…On Sunday, June 22, Stanford Carpenter and Peter Coogan and a bunch of comic book guys will be at the Metropolitan Museum of Art’s in New York City to do panels as part of the Met’s superhero costume exhibit. Although I’ll be there, I don’t exactly know what I’ll be doing, and I’m not sure exactly what’s on display, but I know and trust Drs. Carpenter and Coogan and I’m sure the event will be worth a visit. Afterward, if the weather’s nice, you can treat yourself to a walk through Central Park.

RECOMMENDED READING: Barefoot Gen by Keiji Nakazawa, as noted above.