Review: In Odd We Trust by Dean Koontz & Queenie Chan 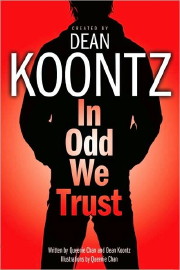 In Odd We Trust

Odd Thomas, in a series of (so far) four novels from Dean Koontz, is a twenty-year-old fry cook in the small desert town of Pico Mundo, California. He has a tough girlfriend – Stormy Llewellyn, orphan and gun-slinging amateur detective – a great way with pancakes, many friends in town, and a secret: he can see the dead. The dead never talk, but they do find ways to communicate with Odd, and to get him to help them.

[[[In Odd We Trust]]] takes place when Odd is nineteen; it’s a prequel to the novels. Very early on, in a scene reminiscent of the great amateur “consulting detectives” stretching back to Sherlock, the local police chief, Wyatt Porter, comes to ask Odd for help. Joey Gordon, a seven-year-old, was killed brutally in a home invasion during the fifteen minutes between being dropped off after school by a neighbor and the arrival of his housekeeper/nanny. The killer left a cryptic note, made up of letters cut out of magazines, but no normal clues.

The police are baffled, as they so often are in stories like this. Sometimes I think the police exist in fiction merely to be baffled while the much smarter and more skilled amateurs do their legwork for them, and then sweep in at the end to do the actual arresting.

Once Odd learns that the housekeeper in question – the young woman who discovered the body – is his and Stormy’s friend Sherry Sheldon, he has to become involved. He finds the ghost of Joey Gordon, and gains the boy’s trust, to get his help in tracking down the murderer.

Soon the murderer is sending more letters to more families, and both Odd and the police assume that he will soon strike again – that he’s a serial murderer of children. But they also realize that this murderer is very good at misleading them…

In Odd We Trust is serviceable, but always remains earthbound. The dialogue works just fine to move the story along, but it’s a bit more clunky and roundabout than it needs to be. And Chan’s art tends to stiffness and the repetition of a few favorite motifs – her characters sweat a lot, sometimes in discreet drops on their lower faces and sometimes in massive manga-style teardrops hanging in mid-air near their heads. Even worse, she can’t manage to draw a recognizable Elvis or Lyndon Johnson, so we have to take her (or Odd’s) word that the people under those names are who she says they are.

In Odd We Trust will be grabbed up by the existing Odd Thomas (and Koontz) fans who are willing to read comics – still, even these days, a noticeably smaller subset of all of his fans – but I expect even they will be wracked by debate over whether Chan’s Odd matches their own personal images of him. For those of us who haven’t read the novels, it might be a decent introduction to the series, but I have to say, for myself, I really don’t feel any urge to continue reading about this guy.