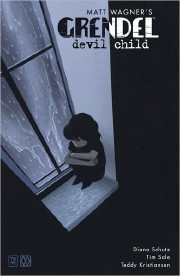 It’s generally not a good sign when a series turns from telling stories at the far end of its timeline to filling in the gaps in earlier stories and explaining all the backstory — do I need to mention George Lucas here? — so these two new collections filled me with some trepidation. They’re both reprints of older material — older even than I thought, from 1999 and 1994-95 — but were explicitly returns to even earlier stories.

Matt Wagner’s series of [[[Grendel]]] stories started in 1982, and the main sequence ran from 1986 through 1992 (with a gap near the end caused by the collapse of Wagner’s then-publisher Comico). They started as the story of a near-future crimelord named Hunter Rose who used a mask and electrified pitchfork to terrorize…well, everyone, really. After Wagner wrote the story of Hunter’s inevitable demise, he rethought “Grendel” as a force of evil and aggression that possessed various people through a long future history. With various collaborators (and a number of stories entirely by other hands) and a great diversity of storytelling styles, the Grendel stories all had something in common: a deep, central notion that people are full of evil and corruption, and that life is inevitably nasty, brutish, and short.

Stacy Palumbo was the (adopted) daughter of the first Grendel, Hunter Rose, and the mother of the second, Christine Spar. She was a serious but lovable girl in Hunter’s story, and dead by the time of Christine’s. Her unpleasant life in between was backstory in the Christine Spar stories, but here it’s dramatized to wring maximum pathos.

(Think “maximum pathos” is too much? Try this line from the back cover of [[[Devil Child]]] — “The ugly world has no shelter for frightened Stacy, the pivotal link in a chain of evil that extends to the limits of time.” The limits of time, huh? Okay, if you say so.)

Schutz was, and is, Wagner’s long-time editor, on Grendel as well as other projects. If anyone knows the world as well as Wagner, it would be her. And she does channel the woe-is-us tone of the lesser Grendels like Brian Li Sung (and, even more so, every single civilian in Grendel-world) here.

Stacy narrates this story, originally published as two separate issues. The first sees her as a young woman, meeting the man who will be her husband, and having horrible things happen to her. In the second part, she’s much older, and not much specifically nasty happens to her, but it’s far too late for her to have any happiness. Her story is drenched in misery, and, unlike a Grendel, she doesn’t even get the chance to pick up something pointy and go on a stabbing spree before she dies. Sad.

The art is atmospheric and quiet — all of Tim Sale’s people look pretty much the same as Tim Sale characters from every other project, but that’s probably why he’s a fan-favorite. Kristiansen paints over Sale’s art, nicely unifying the whole thing. The art is gloomy, as it should be, and does its job well. 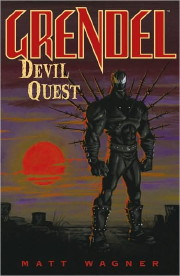 The main sequence of Matt Wagner’s Grendel series was over by 1994, when these stories started appearing as back-ups in the [[[Grendel Tales]]] series, which had stories by others set at the end of Wagner’s timeline. And, despite hints of other possibilities, Wagner hasn’t told any stories earlier than the Hunter Rose Grendel, or later than the cyborg Grendel-Prime, since that time. He’s gone back several times to have more stories about how unstoppable and nasty Hunter Rose is (and a couple of times to ring similar changes on the even more brick-like Grendel-Prime), but none of those stories — however stylish and entertaining they may have been — have advanced the character, or the concept, one millimeter.

The seven stories are each told from a different point of view, in a schema organized around the old kid’s rhyme “rich man, poor man.” A wealthy creep sets a mercenary to look for Grendel-Prime, because the ineffectual Grendel-Khan has sent out two mercenaries to do the same. A female miner meets G-P, and suffers the usual fate of people who do. Those two mercenaries torture a doctor’s lab assistant, and then we see the one mercenary following his own trail. The unfortunate lab assistant’s doctor boss is working on a time viewer for G-P when the two mercenaries cause trouble, and then the Grendel-Khan discovers just how useless and ineffectual he really is. Finally, G-P returns from his trip to Gotham City without his luggage — isn’t that always the way? — and kills the first person he sees, for good luck.

Again, all of these pieces are formally inventive and stylishly done, in full painted color by Wagner himself. But they’re yet more little Grendel stories that all say the same thing: people are shit, and the sooner you kill more of them, the better. Short Grendel stories — like these and the black & white & red Hunter Rose stories Wagner has been doing in recent years — make that theme even more obvious and upfront, since it needs to be hammered home in each individual story. It’s all good comics, and Wagner’s creation is a powerful one, but it gets wearying to be dipped in the same depressing moral every eight pages.