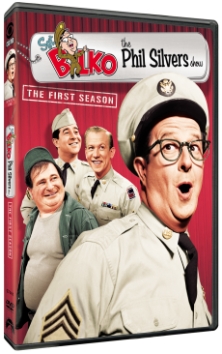 Phil Silvers perfected his fast-talking, scheming promoter character during his years on the vaudeville circuit and polished it in a variety of feature films so that by the time he debuted on his own television series, it was pitch perfect. His Sergeant Ernest G. Bilko became a template for comedy roles imitated by others across the pop culture spectrum. For example, the Baby Boomers grew up with the Bilko persona imprinted on Hanna-Barbera’s Top Cat. Silvers rarely varied from the character, using it to good effect in subsequent films and even the Broadway play[[[ A Funny Thing Happened on the Way to the Forum]]].

The series was originally called [[[You’ll Never Get Rich]]] but in less than two months after its September 20, 1955 premiere, it was renamed [[[The Phil Silvers Show]]] and was subsequently syndicated as [[[Sgt. Bilko]]]. It won the Emmy Award for best comedy three seasons running with Silvers winning once as best actor. Series creator Nat Hiken was a recognized comedy writer, now a series creator and followed with [[[Car 54, Where Are You?]]] and [[[McHale’s Navy]]]. Such was the show’s fame and success; it was among the first situation comedies to run on the first incarnation of Comedy Central.

To see what the fuss is all about, you can now own the first season, releasing tomorrow as Sgt. Bilko: The Phil Silvers Show, from Paramount Home Entertainment. There are 34 episodes on five discs along with just a handful of extras.

What you get is Sgt. Bilko, head of the motor pool at sleepy Camp Baxter in Roseville, Kansas. He and his platoon of career soldiers never had money and always sought a way to get ahead – one scheme after another from card games to horse racing. Invariably, it meant out thinking the camp commander, Col. John T. Hall (Paul Ford) or fellow sergeants. Aiding him were his corporals Rocco Barbella (Harvey Lembeck) and Steve Henshaw (Allan Melvin). Throughout the season, characters recur such as his occasional romantic foil Sgt. Joan Hogan (Elisabeth Fraser), but all were in support of Bilko.

Interestingly, the series was produced and filmed in front of a studio
audience, shot in New York City at Dumont’s television center. As a
result, Silvers did a fair amount of ad-libbing and everyone else had to
keep up. Initially, Bilko was a career enlisted man trying to make his
life comfortable. It was in subsequent season, after Hiken left, that
Bilko was seen as merely avaricious. Repeatedly throughout the first
season you see that he also had a soft heart and would stand up for his
men, such as the episode when a society woman laughed at Pvt. Duane
Doberman (Maurice Gosfield)’s invitation to be their queen in the
episode “Mardi Gras”. The season ends in Bilko-centric episode, “Bilko
on Wall Street” as he helps a former comrade-in-arms get treated fairly
at his firm. You see the Bilko through others’ eyes such as “Furlough in
New York” when he sees that the guys he served with in WW II have done
so well in the private sector, he’s actually embarrassed to be seen as a
Master Sergeant.

Among the funniest episodes include “The Court Martial” which includes a
commentary from the actor George Kennedy, who began his Hollywood
career by consulting on armed services-related series while still in
uniform. Allan Melvin, one of those terrific character actors for
decades of television, also provided commentary for the first episode,
“New Recruits” and reminisced about what it was like making the series.
There are some guest appearances by people you see earlier in their
careers such as a pre-Munsters Fred Gwynne as “The Stomach”, in “The Eating Contest”.

The extras include the original CBS opening and cast commercials, both
of which involved smoking so come with warning labels. The final disc
also has an episode of The Lucy Show from 1966, wherein Silvers
guest starred as an efficiency expert but was essentially playing the
same part, prompting Gale Gordon to note that the expert reminded him of
a sergeant he once knew.

Despite the series being 50 years old, the humor still works because the
characters are sharply defined and years of stage experience allows
them to develop working rhythms. The writing is character-based, fast
and frenetic at times and always entertaining. This series is well worth
a look and a great example of the best of early prime time.