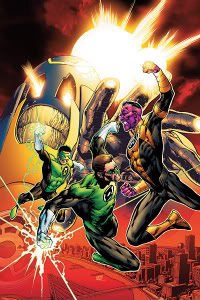 This past weekend at Heroes Con, a panel of some of comics’ biggest stars weighed in on collaboration and, eventually, the art of the crossover.

Mostly, that meant griping about the impossible task of tying into a Final Crisis

. Matt Fraction went so far as to say he opted out of some crossovers because the stress of it would take years off his life. Jimmy Palmiotti essentially acknowledged the failure of DC’s Countdown

Clearly, it’s not that hard for a big superhero event to careen right off the tracks. Which means we should all pay attention when one works particularly well, as in Green Lantern: The Sinestro Corps War

The story is simple enough: Sinestro breaks loose and raises the most terrifying army ever seen, including all of DC’s strongest villains except for Darkseid. And the Green Lanterns fight back.

In this second half of the story, we see the classic turning of the tide back in the heroes’ favor, although Geoff Johns and crew add enough wrinkles to make the inevitable victory quite shadowy, if not outright pyrrhic.

Johns taps into big ideas like the eternal question of ends and means, the nature of heroism and evil and the dangers of emotions without ever letting those ideas stand in the way of the fast-paced fighting. And he uses those ideas to drastically alter the mythos of the Green Lantern, jumping into a fascinating new paradigm that is currently playing out in the monthly [[[Green Lantern]]] books.

There are a few weaknesses here. The story is a bit too big and moves too quickly in spots, with a few plot points falling to the wayside. There’s a scene of a fight crashing into the San Diego Comic Con that’s just way too cute for it’s own good. And the arrangement of issues puts some plot points out of order.

The art is a strength, as Ivan Reis continues to evidence his ascension to the pinnacle of superhero comics. No one matches him for attention to detail.

And the bonus material — sketches and interviews with creators — sheds quite a light (pun intended) on the creation of the event. Which brings us back to my opening point: how to make a good comics event.

The [[[Sinestro Corps War]]] succeeded for a number of reasons, with the inclusion of elite creators being atop that list. But it also succeeded because, grand as it was, it also was a limited crossover, staying within the Green Lantern family.

That limited nature might have kept DC from selling a few superfluous tie-ins, and it may have meant that no other DC books reflected the events of the war, but for the event itself, it enabled the creators to finely tune the books so that it hummed along smoothly, never staggering under its own weight.

We’ll just have to wait and see if anyone learns from this lesson.