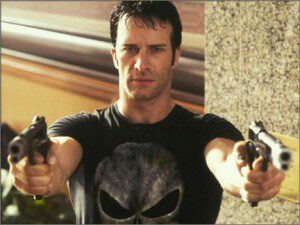 Marvel Studios has reacquired film rights to the characters of Blade and The Punisher according to Chief Creative Officer Joe Quesada. He announced this during his Cup O’ Joe panel during Comic-Con International, but cautioned the audience that this did not mean either was being put into active production.

As a result of these acquisitions from New Line Cinema and Lionsgate, respectively, this leaves the X-Men, Ghost Rider, and Fantastic Four franchises still under 20th Century-Fox control while Sony continues to produce Spider-Man films. A Ghost Rider sequel with Nicholas Cage returning as Johnny Blaze is in the works while a reboot of the FF is in pre-production. X-Men: First Class performed so well this summer sequels are already on order.

Marvel has indicated that as the first cycle of films based on their best known heroes chugs along, the focus is shifting to their lesser known characters, most likely leading off with Doctor Strange and Edger Wright’s Ant-Man. At present, none of these projects have been given release dates meaning they are far off.

At the Marvel Television panel conducted by their VP Jeph Loeb, it was shown that the ABC pilot for Alias Jessica Jones continues to move through the production process, and would include Luke Cage in the supporting cast. Cloak & Dagger is also in development for ABC Family.

2012 will see The Avengers on May 3 followed by Amazing Spider-Man over July 4 weekend with 2013 already ticketed to screen Iron Man 3 and Thor 2. Beyond that, the calendar and options remain wide open even though lead actors including Chris Evans, Chris Hemsworth, and Samuel L. Jackson are signed for multi-picture deals. Evans, for example, has a nine picture deal with Captain America and The Avengers only covering two of the nine.