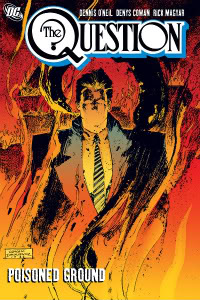 After 20 years, DC is finally collecting Dennis O’Neil and Denys Cowan’s run on The Question

, with the second volume, Poisoned Ground

It’s a collection that’s well worth the wait, and I’m not just saying that because the author is one of ComicMix‘s own. While the first collection (Zen and Violence

) was good, [[[Poisoned Ground]]] shows the creative team truly finding their voice — think tough and hardscrabble like The Spirit

, but with a philosophic bent.

O’Neil explores not just the mind of his hero (who still has plenty of questions for himself), but those of his villains (who are always far more complex than first impressions indicate). The narrative slips between harsh reality and even harsher dreams, a paean to the ugliness of the world.

The book features three standalone stories and one three-issue story, each in turns bizarre, troubling and inspiring. The art is creative, highly detailed and evocative, and O’Neil’s scripts are every bit as inspired and poetic as those of Alan Moore or Neil Gaiman.

Especially now, with Vic Sage having been killed off in the current DCU, these collections are a must-have for fans of The Question, or anyone who likes their comics with plenty of depth.