You know you’ve talked about it with your friends. "Mr. Fantastic? He’s got, like, 17 doctorates… Shouldn’t he be ‘Doctor Fantastic’ by now?" And let’s not forget "Captain Marvel, Junior." Captain Marvel’s not his father. What gives? And what’s the deal with that Golden Age aquatic hero who called himself "The Fin?"

No matter how much we love comics, there are some superhero aliases we just can’t get behind. So we did our best to compile some of the worst superhero names in existence.

By the way, members of the Legion of Super-Heroes have been omitted from the list, because… well, it’s just too easy to pick on Matter-Eater Lad and Bouncing Boy.

6. KID MIRACLEMAN: In the U.K., he was originally called "Kid Marvelman." That doesn’t change the fact that it’s a lame name. Why? 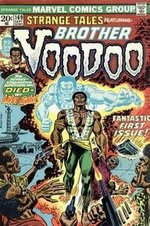 : You’re Jericho Drumm (already an awful name) and you have supernatural abilities. They don’t put you on the level of Doctor Strange, Earth’s Sorcerer Supreme, of course — but you still want people to take you seriously. And what better way to earn that fear and respect than a name that makes you sound like you hang out with Dolomite and Super Fly?

Man, this couldn’t be worse. What’s that? It gets worse? You say that you learned voodoo magic from a man called "Papa Jambo" and that one of your signature powers is "mystic smoke?" Seriously? Oh, we’re not touching that…

4. THOR GIRL: Okay, "Supergirl" works. Even "She-Hulk" works. But Thor isn’t a title or an alias used by the God of Thunder, it’s his actual name. Calling someone "Thor Girl" is like calling Jean Grey’s male friend or cousin "Jean Grey Guy."

3. SUPER-CHIEF: Ah, the good ol’ days, when character names shouted out ethnicities – just in case you needed a warning.

So let me get this straight: You’re really "Flying Stag," an Iroquois living in the 15th century and supreme chief of the Wolf Clan. You found a meteorite that gives you super-strength, super-speed and an increased lifespan, all of which you attribute to the great spirit Manitou (even though that’s Algonquin and not Iroquois). 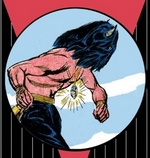 So you figure, "Hey! If I don a buffalo mask in times of trouble and call myself ‘Super-Chief,’ then I can help everyone and no one will suspect that I am really the same chief who conveniently vanishes from time to time and whose absence everyone would notice since, you know, I’m in charge of the clan."

Really? That was your plan? Moving on…

2. THE WHIZZER: Now here’s a name – and a character – that’s lame on many levels. First, let’s get personal – your origin sucks. An emergency transfusion of mongoose blood gave you superhuman speed? That didn’t even make sense  in the ’40s!

You could’ve called yourself the "Runner" or the "Mongoose", but no. You figured, on top of a stupid origin, you’d wear a yellow bodysuit and call yourself "The Whizzer." And then, to help intimidate your foes and seem mysterious, you painted a big "W" on your chest and gave yourself a mask that actually shows people your face.

Why not just call yourself "Rikki Tikki Tavi" and be done with it? Loser.

1. THE 3-D MAN: Um … that’s your name? That’s the unique quality that separates you from the ordinary man on the street? Physically existing in three-dimensions?

Oh, and what’s your power? You’re three times stronger, faster and more agile than an Olympic athlete and you can only be summoned by a pair of sunglasses with red and green lenses? Lame costume, lame gimmick. The fact that you also had the extra weird power of being able to sense the presence of Skrulls made me realize months ago that there was a chance you might be appearing again soon.

Sure, everyone assured me I was being paranoid. After all, Marvel would never bring back such a silly charact- … Wait, what’s that? 3-D Man is supposed to play a major role in the new Secret Invasion crossover?

Alan Kistler once met a genie who offered to give him the powers of the 3-D Man. He beat up the genie out of principle and then stole his pants. He has been recognized by media outlets as a comic book historian and can be seen in the special features sections of the Adventures of Aquaman and Justice League: New Frontier DVDs. He really wishes Marvel, DC or the kind folks at Doctor Who would realize he has some fun story ideas to share with them. His personal website can be found at: www.KistlerUniverse.com.