This week in comics was all over the map, a schizophrenic jumble of thrills, idiocy, fun and pulp. The good books were great, and the bad ones were terrible. At the very least, it was entertaining from start to finish. 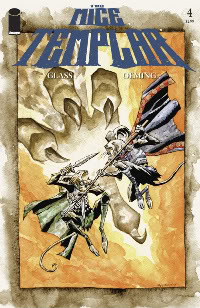 Book of the Week: The Mice Templar #4 — After the third issue of this series came out a couple months back, I wrote that while it was a good read, I was still waiting for the story to diverge from the rote fantasy plot. Writer Bryan J.L. Glass sent me a note saying just wait for issue #4, when things take a big turn.

Sure enough, the latest issue marks the point when The Mice Templar went from good to great. This isn’t just a fantasy tale featuring mice, it’s an intricately detailed epic and one of the best stories on comics shelves today.

In issue #4, Karic and Pilot continue their journey, with Karic showing both his potential as a great Templar and his youthful uncertainty. As they go along, Glass draws readers deeper into the massive mythos he has created, a back story that is mysterious but not confused. The issue ends with a too-good-to-spoil moment of "nothing will ever be the same." My only complaint is having to wait two months for the next issue.

Lastly, Mike Oeming’s art on this series improves with every issue, and it started out strong. He manages to make scenes of fighting mice into tense, dramatic moments, and his watercolor work in the concluding pages expands on the perceptions of what comic book art can be.

finally have an answer to the question of "Where the hell did Nick Fury go?" In this potboiler of an issue, Brian Michael Bendis diverges from the boring Mighty team to trace Fury’s movements while in exile, starting with the one-eyed wonder finding out about the Skrull infiltration.

From there, a paranoid Fury pushes forward as covertly as possible, investigating anyone and everyone to determine who the Skrulls are. The issue ends with an exhausted and uncertain Fury standing before a wall of photos of heroes, some marked as Skrulls. The issue follows in tone the great Gene Hackman thriller The Conversation

, and is perhaps the best Secret Invasion

— This Lovecraftian tale from BOOM! Studios has been up and down over the first storylines, but the latest (The Gray Man) starts off like a perfect blend of Lovecraft’s stories and an old issue from EC Comics. A mysterious girl — you know trouble’s brewing when her nickname is Lucifer — is pulled into a sheriff’s office, and the authorities struggle to figure out how she’s connected to all the recent trouble in Arkham.

Michael Alan Nelson’s script work because he perfectly sets up the sheriff and his deputies in the role of the unknowing everymen who’ve stumbled into some ugliness far beyond their comprehension. This is a genuinely creepy book.

— The best of a crummy lot from DC. Grant Morrison’s story starts out boring, rehashing the tired "Is Batman the mask, or is Bruce Wayne the mask?" plot device. Meanwhile, terrorists are after either Bruce or gal pal Jezebel Jet, and the real dynamic duo of Nightwing and Robin continue to work well together from the pages of Nightwing

. Morrison sort of subverts his clichéd set up, though by twisting the story into a straightforward tale of Bruce’s struggle to balance his two lives.

— WildStorm continues with the strong adaptations from the Supernatural

TV show, here focusing on the dad of the demon fighters. Tense and moody throughout, with a good sense of heightening dread, things build to a somewhat goofy (and Kill Bill

-esque) sword fight. Still, it manages a good balance of challenges from everyday life and from the supernatural.

— A story of old wounds and difficult decisions, slickly told in the dual narratives of Thor and Odin in the spirit world and Donald in the real world. Amid lofty conversations and cool viking battle, the gods fill in some of their history in a compelling way, while Donald tries to help an old flame but ends up falling through the ice in more ways than one.

— Since we’re talking about vikings, the Norsemen of the realistic variety in Brian Woods’ story take a bit of a breather this issue. Woods has set up a big fight between Sven and his hated relatives, but this issue treads back into the past to explain how Sven ended up far away from home. Unlike the flashback of, say, Lost

, these ones don’t further advance the present story and don’t offer much that’s new, making this issue all too forgettable. 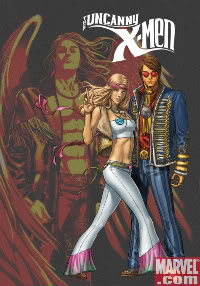 — Talk about schizophrenic, this issue has half of a great story (Wolverine, Nightcrawler and Colossus fight giant robots in Russia) and half of a groan-inducing mess (Cyclops and Emma dress up like hippies in San Francisco). At least the cover (at right) betrays the ridiculousness inside.

Justice League of America #20 — Even when you’re the fastest man on earth, you don’t have time for everything. That’s the theme of this issue, as Wonder Woman comes down on Flash for not being active enough with the League. One of the key ways to make a team book interesting is to focus on team dynamics, which makes this a solid read.

Birds of Prey #117 — It’s always cool to see neat things done with lame villains, and this issue is overflowing with lame villains (Mind-Bullet?!?). Unfortunately, they just continue to be lame. That and a stupid moment of a physical attack on Oracle through her computer (and that works how?) override a good moment for Misfit and a personal crisis from Manhunter.

— This series has long been one of the more worthwhile Ultimate franchises, but this story of Ultimate Thanos falls into the category of silly adaptation of the main Marvel U. The Michael Turner-impersonation on the art front is just a moldy cherry atop this pile of garbage.

Hulk vs. Hercules #1 — One of the unresolved issues I have with Marvel is why Hercules replaced Hulk in his book. Boosting sales, maybe. No answers are forthcoming in this pointless art amalgam. A collection of Hulk and Hercules pin-ups would’ve been more worthwhile.

Checkmate #25 — If you can overcome the most jumbled first pages of any comic I’ve ever read (no, really), then you’ll find a decent enough story of Checkmate doing things the hard way to earn the respect of the superheroes. The conclusion of the battle with the snake men is surprising and surprisingly touching.

and Death of the New Gods #8 — I saved the worst for last. Two of DC’s big series of the past year went out this week with a bang. At least, if by "bang" you mean a convoluted explosion of idiocy.

New Gods is essentially a long fight between Darkseid and Orion’s ghost (what?) as narrated by Superman. That might be fine, except everything in this book runs in direct contradiction to what’s happening in Countdown.

Speaking of Countdown, it begins with one character thinking back over everything that’s happened and muttering, "There is no way I can write this story." It almost seems like a wink from Paul Dini, who managed this inchoate mess. The gist of the issue is that the central characters are confused by everything (join the club) and an old guy turns into an OMAC. So ends one of the largest-scale failures in comics history.