A big week, with Marvel kicking off the summer event season with Secret Invasion

#1, which earned a separate review. Plenty of other comics came out, with a couple of princes but way too many frogs. 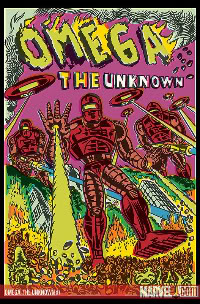 Book of the Week: Omega the Unknown #7 — This issue earns "instant purchase" status for the amazing Gary Panter cover (seen at right) and his interior pages depicting a comic as drawn by the hero of the story (wrap your brain around that one).

So we learn a little more about the history of the invading aliens and how they began their essentially nanotech-style war on humanity (and other alien races before that). Back in the present, Omega remains caught in the Mink’s maze and unable to join the fight against the robots. He does, however, catch a rat to eat. I don’t know if that’s better or worse than when he ate a bald eagle in an earlier issue.

Titus, the seeming Omega protege, and friends end up sneaking into the Mink’s base to bust out Omega, only to make a pretty alarming discovery that I won’t spoil here.

This series is big and crazy and reckless, but I still get the sense that writer Jonathan Lethem is very much in control of the story.

Action Comics #863 — Both in this series and in Green Lantern, Geoff Johns is pulling an interesting trick by going a ways into the past to develop upcoming big events. And while all this time travel and Legion of Superheroes stuff could just be an excuse to show off Johns’ mastery of continuity, this manages to be much more, with a slobberknocker of a fight and some classic teamwork. By the time it was over, I was more excited about Final Crisis: Legion of Three Worlds than I was about Final Crisis.

— A mysterious villain is nefariously reviving dead villains on his secret island base, then escapes in a rocket when Nightwing and Robin defeat him. Sounds like something right out of James Bond, albeit without the beautiful women and cocktails. Somehow it works really well, probably because of the great interplay between Dick and Tim, two characters who should work together more often.

— This one was a near miss. Beautiful art from Eduardo Risso, particularly of the sequence of the atomic bomb dropping. And while the story of Logan’s first love is touching, the book moves so fast that it can’t quite convey the desired importance, especially considering this is supposed to be the story of how Logan came to call himself Logan. The villain is a good one, though, very creatively designed.

Buffy the Vampire Slayer #13 — I’ll admit, I’ve never watched the TV show and I’m new to the comics, so all this is fairly obtuse to me. But artist Georges Jeanty visits the same comics shop I do, so I wanted to give it a try. And, my confusion aside, it was a well made book that surprised me with its humor. Where else will you see a vampire groan, "Oh balls"?

The All-New Atom #22 — Another quality issue from this series, with the crap hitting the fan in a very big way. Ryan’s blood monster thing is running amok, apparently killing everyone who gets in its way. Things go from bad to worse to worse yet, and the knight in shining armor turns out to be more of a wolf in sheep’s clothing. Pure entertainment, as long as you don’t mind a little science mixed in.

— The good news: We’re back to Paul Dini writing Batman stories that aren’t tied into a big event. This isn’t one of his best, but it’s fun throughout, with very interesting interplay between Bruce and Zatanna and what amounts to a quick flash of some leg from the new, female Scarface.

— Our first outright stinker of the week. Howard Chaykin is a terrible fit for this book, and his goofy art saps all visceral energy from the issue. Also, the Jigsaw story is striving for importance by harking back to the death of Frank’s family, but that’s become such a generic storytelling tool, just like every self-serious Batman story that falls back on the deaths of Bruce’s parents.

Countdown: Kamandi the Last Boy on Earth — I started to read this, then I remembered that basing Countdown on Jack Kirby’s old DC creations was a really bad idea.

Young X-Men #1 — All you need to know: Even though the X-Men are no more, Cyclops continues to assemble illogically conceived teams of covert mutants to fight an ill-defined war. I’m struggling to decide if this new take on Cyclops more closely resembles Tony Stark or George Bush.

— Dynamite’s revival effort of forgotten superheroes is a pretty standard superhero story, only with characters I don’t know and don’t care about. It feels like the creators are playing in the sandbox, only they’re playing with those generic versions of toys, like Go-Bots.

Scalped #16 — This series of "Sopranos on an indian reservation" is much better when it doesn’t go over-the-top, and this muted issue is one of the best yet. Jason Aaron’s dialogue is smart and sharp, though a bit too plentiful. Still, having grown up very close to the setting of this story (yes, it’s a real place), I’m so familiar with the true and fascinating story of that area that I struggle to get into this book.

— If I gave an award for worst of the week, this would be your winner. For a book that purports to be a realistic take on being a masked hero, this story is fanciful in the extreme. There’s a fight scene that’s supposed to be realistically bloody and violent, but it comes off like a buckets-of-blood B-movie. And while Mark Millar hints at a greater message behind the book, one never coalesces. More worthwhile commentary can be found in the average capes-and-tights book.