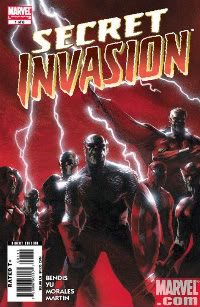 Normally I find Bendis goes too far with the offbeat dialogue and cultural references, but with this issue he seemed to stray from that style entirely, with only a few little quips that could’ve come from any writer. Add to that the cliches coming from the “other” heroes and the scene-by-scene writing is very average.

There are a few plot points that don’t seem all that logical. Tony Stark isn’t a complete idiot, which makes it all the more surprising that he didn’t have better safeguards on his armor when he knew the Skrulls were on the warpath and no one could be trusted. And you would think the Fantastic Four would have enough security on hand to notice someone shapeshifting in the lobby, or to realize that Sue was in two places at once.

Also, while I liked the aforementioned foreshadowing, it did take away some of the impact from the Skrull reveals. Lets hope they don’t use that shading device throughout the series.

One of the things about Secret Invasion that has long been talked about as a strength is how much work Bendis did in laying the tracks for the Skrull attack. For me it’s a huge negative, because I’ve been consistently turned off from Marvel comics by the lead-ins to this event. I’m supposed to care about Nick Fury’s disappearance, but that goes back to Secret War

, an overblown event that was so delayed I completely forgot about it. Then House of M bored me to tears and Civil War

brought its senseless spectacle, and by the time rumors of the Skrull event cropped up I’d given up on much of Marvel’s line. That leaves Secret Invasion with more work to do in convincing me to care.

I will say I’m more apt to stick with this series than the previous two Marvel events, but I’m far from sold.