Sequart is excited to announce that 2011 is the YEAR OF ELLIS — as in celebrated comics writer Warren Ellis. Throughout the year, we’ll be offering three books and a documentary film on Ellis, exploring his major works, his overall career, and why he deserves his status in the top pantheon of comics writers. 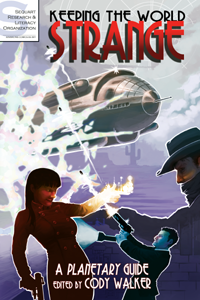 First up will be Keeping the World Strange: A Planetary Guide, edited by Cody Walker. This book of essays will study the exhilarating collaboration of Ellis and artist John Cassaday.  It features essays by CBR’s Chad Nevett and Timothy Callahan (Grant Morrison:  The Early Years), Julian Darius (Improving the Foundations), Patrick Meaney (Our Sentence is Up), legendary comics scholar Peter Sanderson, and many others. The book is scheduled for May 2011 publication.

Our third Ellis book of the year will be Voyage in Noise: Warren Ellis and the Demise of Western Civilization, authored by Kevin Thurman.  This book examines Ellis’s entire body of work for common themes, discovering philosophical perspectives and parallels that illuminate contemporary society.

To top it all off, 2011 will see the premier of the documentary film Warren Ellis: Captured Ghosts, directed by Patrick Meaney and produced in association with Respect! Films (Amber Yoder, Jordan Rennert, and Patrick Meaney). It’s executive produced by Sequart (Julian Darius and Mike Phillips) and F. J. DeSanto, with creative consultant Kevin Thurman. This follow-up to Respect! and Sequart’s popular Grant Morrison: Talking with Gods features interviews with Ellis and a plethora of other comics professionals. It’s tentatively scheduled for late 2011 release.

Although 2011 is the Year of Ellis, that doesn’t mean Sequart won’t also be releasing other works. In fact, even before any of our Ellis titles, we’re offering Classics on Infinite Earths: The Justice League and DC Crossover Canon, authored by Julian Darius. The book examines classic Justice League stories and universe-wide DC crossovers, arguing that they constitute a literary canon. Along with this book, other non-Ellis projects are in the works, and we’ll be making some major announcements on those in the coming months.