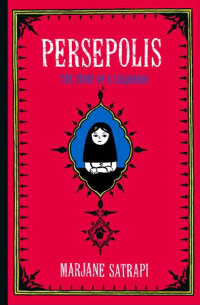 A couple of stories came out today in university newspapers revealing the continued growth of interest in comic books and graphic novels is beginning to manifest on campuses.

"It’s a very different choice from what we’ve done in the past," said Sarah Liggett, English professor and Student Reading Program committee chairperson. "It’s a focus on the Middle East, which is certainly very much in the news today, and it’s the first summer reading selection to be created by a woman. You see not only what she felt in the words, but you see it in the pictures."

From the responses in the article, it sounds like the choice is going over much better than at Ithaca College, where the student paper’s editorial board berated the choice of Persepolis on grounds that it wasn’t intellectual.

In other news, Emerson College is considering adding a comics/graphic novel program, according to the student paper there. For now, the college has added some new comics-related courses, which aren’t for credit but instead offer certificates for those who pass the courses. Andy Fish is the instructor.

[Fish] is currently working on a DC comic project illustrating the graphic novel "BATMAN 1939" and his own comic "The Boy Who Wished He Could Fly."

"Who knows if walking among the student body, or hanging out in the Dunkin Donuts on the corner is the next Frank Miller or Will Eisner?," Fish said. "Graphic novels have been gaining respect among the squares, and I think it is great that Emerson is offering this program, and I’m delighted to be a part of it."