Boom! Studios has made a name for itself as a comic book version of the Spike TV network, but this week the publisher released two new collections that step away from that formula. 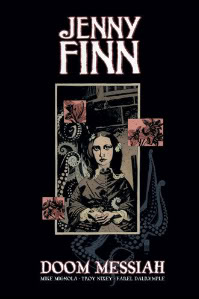 ($14.99) is a collection of the three original Jenny Finn issues and the all new fourth and concluding chapter. The book is written by Mike Mignola and is his truest channeling of Lovecraft yet. In fact, the story closely echoes one of Lovecraft’s stories (I forget the name) about a fishing town being invaded by mysterious sea creatures.

That’s not to say the story isn’t original – it’s more elaborate and bizarre, with typical Mignola flourishes, like the constant appearance of fish that mutter, "Doom."

The narrative is simple enough – an average Joe finds himself mired in otherworldly terror and tries to fight (and think) his way out of it – but the plot never falls into stereotype and every few pages brings a new surprise.

Troy Nixey served as artist on the first three issues and perfectly captures the ethereal horror of Mignola’s script (and, thankfully, doesn’t ape Mignola’s artistic style). Farel Dalrymple illustrated the fourth chapter, and while I love his work, this probably isn’t the best project for him.

That bit of criticism aside, Jenny Finn is a great piece of haunted fun. And I forgot the best part: plenty of tentacles. 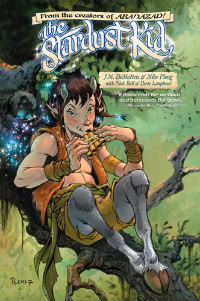 The other new collection is The Stardust Kid

It follows Cody, a fairly average boy, who falls smack dab into a big save-the-world adventure after becoming friends with a mysterious magical creature. Cody and his pals – normal and fantastical – wind up facing an array of evil tree creatures and other beasts.

DeMatteis doesn’t reinvent the fantasy wheel here. He borrows bits and pieces from the vast wealth of children’s fantasy – both in terms of creatures and in themes.

But he pieces the story together in a new way, complete with a creative storytelling trick (the book is narrated by a book). More than anything though, The Stardust Kid works simply from the honesty and clarity of DeMatteis script.

A lot of credit also goes to Mike Ploog, whose illustrations call to mind some of the classic fantasy adventures, from Alice in Wonderland

to The Dark Crystal

It’s definitely not a book for those only interested in the tough-guy material Boom! regularly features, but a few of those tough guys would be well served by reading it to their children.