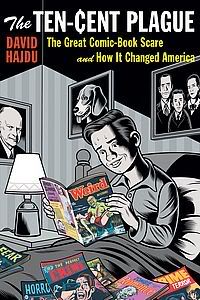 The journalist David Hajdu’s new book, The Ten-Cent Plague: The Great Comic-Book Scare and How it Changed America

, has been billed as a retelling of the little-known inquisition against comics that nearly killed the industry in the 1950s.

It does tell that story (and quite well), but perhaps more importantly it serves as one of the best histories yet of the Golden Age of comics. Picking up literally with the creation of the comic book, The Ten-Cent Plague chronicles the medium’s rise as cartoon characters gave way to superheroes, adventurers, pirates, criminals and jungle queens.

With an unerring eye for the telling detail, Hajdu brings to life the mad men of the early comics scene, a rag tag group of artsy teens and swindler publishers who make today’s comics personalities seem tame by comparison. Big names like Will Eisner and Bob Kane earn mention, along with a great number of lesser-knowns.

Harry "A" Chesler, Jr., the comic-book packager, applied the "Jr." to his name or dispensed with it as he saw fit, and put quotation marks around the initial because he thought they were stylistically correct, and he had a point. When he was asked what the "A" stood for, he said, "Anything."

If anything, Hajdu goes a bit overboard in describing so many people in great detail. While these anecdotes are interesting and reveal an impressive layer of research, they also meander and distract from the central narrative. That being the progression of comics pushing ever harder against any perceived boundaries, just as the youths who devoured the books tested the confines of their mid-century upbringing.

The key achievement of The Ten-Cent Plague lies in this connection between comics and the culture surrounding them. Instead of simply retelling the history of comics, Hajdu places each event firmly in context with the surrounding society.

He puts the rise of "crime comics" beside events like World War Two and its fallout, which saw parents absent at war or at work more and more, and children left to their own devices. Many in that rudderless generation rebelled against the constraints they felt around them. Some became violent.

As millions of youths across America read comics, it was inevitable that a few misbehaving children would also read comics. But where logic – and thorough psychological research – indicated no relationship, a handful of church leaders and "child experts" with an eye for publicity saw a firm cause and effect. A youth sees something bad in a comic, they’re going to be tempted to emulate it.

Hajdu sides firmly against the anti-comics movement, though he allows their own words and actions to hang them. He lists their inconsistencies (comics were called both communist and fascist) and leaps of logic. He quotes Fredric Wertham – the psychologist who wrote Seduction of the Innocent

, which turned up the heat on comics – as saying, "I think Hitler was a beginner compared to the comic-book industry."

To Hajdu’s credit, he doesn’t let the comics creators off without scrutiny. They were not innocent, he writes, detailing how the young writers and artists continually pushed what could pass for "good taste" without considering the repercussions, and how editors and publishers rarely offered any oversight, as long as the money kept rolling in.

The book crescendoes with a thorough retelling of the Robert Hendrickson-led senate hearings that questioned comics. By this point, the tide of public opinion had essentially already sealed comics’ fate, as it went unquestioned that reading gruesome stories would lead to gruesome behavior. Bill Gaines, the EC publisher, becomes something of a central character, trying mightily but failing miserably to save the day.

It was simply "strange and sad," Hajdu writes of the ensuing collapse of the industry, the end to comics as they were.

From that fitting coda, the book unnecessarily continues, petering out with a strangely reverent praising of the early years of MAD Magazine

, an inchoate theory that comics paved the way for today’s youth culture and a non-too-revelatory interview with R. Crumb.

Apples to oranges aside, I can’t help but compare The Ten-Cent Plague to another book set in the same period, The Amazing Adventures of Kavalier and Clay

. In many ways, The Ten-Cent Plague is the book I wish Kavalier and Clay had been. It’s more focused, more interesting and better captures the spirit of the era. And to think, it’s a true story.

Last thought: How about that amazing cover art (seen above) by Charles Burns?