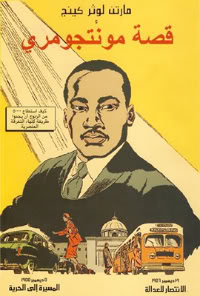 In the great book Freakonomics, one of my favorite stories is the one detailing how the writers of the old Superman TV show used a storyline to give a negative depiction of the Ku Klux Klan, and that alone was one of the most effective methods of turning public opinion against the Klan.

That story came to mind when I came across a couple of articles detailing efforts to combat Islamic extremism through comics.

In Egypt, Hands Across the Mideast Support Alliance has been distributing copies of an Arabic edition of a 50-year-old comic based on Martin Luther King Jr.’s life. The comic is available for download in Arabic and English from the HAMSA Web site.

"The Montgomery Story" was published in 1958 and helped inspire the American civil-rights movement in the 1960s. In 2008, it was translated and designed by young reformers in the Mideast. It features full-color panels depicting the Montgomery Bus Boycott, a campaign to end segregation on buses in the capitol of Alabama. The comic book ends with a section on “how the Montgomery Method works,” outlining essential techniques of nonviolence.

I also came across this article in the Globe and Mail on a comic book designed to combat Islamic extremism produced by officials in a north-German state. The comic, Andi, follows a youth who dates a Muslim girl, and the girl’s brother comes under the sway of an Islamist "hate preacher." (Apologies for the small cover image, below, but it was all I could track down.)

The comic is distributed to schools and is intended for an audience from 12 to 16-years-old. It’s available online in PDF form right here. I learned German in grade school, but sadly since then my knowledge of the language has wittled away to a few numbers and swear words, so I couldn’t read the two available issues.

The article says Muslim response to the project has been positive. From the article:

The comic, printed in 100,000 copies and distributed to every secondary school in Germany’s most populous state, aims to show young people the difference between peaceful mainstream Islam and the violent, intolerant version peddled by militants.

"We were always careful not to hurt feelings and anger people by painting a caricature of Islam," said Hartwig Moeller, head of the NRW Interior Ministry. "We had to make clear we weren’t aiming against Muslims, but only those people who want to misuse Islam for political aims."