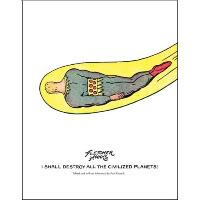 In last year’s collection of Fletcher Hanks comics, I Shall Destroy All The Civilized Planets, one of its best features was an epilogue written and illustrated by Paul Karasik that explained his effort to track down Hanks, or at least one of his relatives.

Karasik ended up at the door of Fletcher Hanks Jr., a great man in his own right who shed a lot of light on his father. Strangely enough, Hanks Jr. had never even known that his father illustrated comics, let alone had become something of an idol in the indie comics community.

According to a story posted on Karasik’s Web site, Hanks Jr. died on March 16 after a March 8 auto accident. He was 90.

Among comics fans, Hanks Jr. will always be known as the son of the evil genius of the Golden Age. But it’s important to recognize his accomplishments, many of which overshadow his father’s legacy:

Hanks, known for his action-adventure life and strong opinions, is best known for his experience "flying The Hump," both in wartime and years later in the commemoration of his fallen comrades, and his book, Saga of CNAC 53, which chronicled those events. He often said his life’s work was remembering his 23,000 friends who died in the war.

From July 1942 to August 1945, Hanks, sometimes called "Christy" by his colleagues, flew 347 trips in unarmed C-47s delivering supplies to inaccessible areas of China using a path from India over the south ridge of the Himalayas called "The Hump." Years later, in 1997, he returned to China and he and a group of Chinese soldiers found the wreckage of CNAC 53, the airplane piloted by American Jim Fox and his Chinese co-pilot and operator.