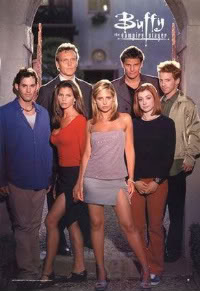 I guess it has to do with comic book culture becoming ever more enmeshed in celebrity culture, but it seems like MTV has become the place to go for interesting material in the world of comics and comics-related movies and TV shows.

The latest: At a reunion of Buffy the Vampire Slayer cast members, several spoke favorably of the potential for an all-new Buffy movie. And, of course, they also brought up the recent lesbian tryst in the Buffy comics series.

Beyond the question of whether or not to include girl-on-girl action, a few other pitfalls stand in the way of a movie. No script or studio is in place, and Joss Whedon is busily crafting a superhero musical.

Speaking of Whedon, he certainly didn’t sound opposed to the project, although he seemed far to dismissive of the comics:

As Whedon said on the panel, "many stars" would have to align — not the least of which would be a certain lead actress wanting to participate. "But if I had to shoot down everything that we’re doing in the comics because we’re doing a film," Whedon said, "I wouldn’t lose a lot of sleep over it."