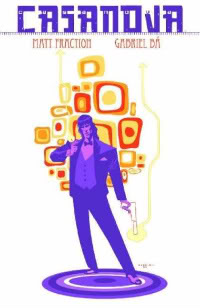 A big week for writer Matt Fraction, who’s just nabbed a couple deals to see his comics turned into movies.

He’s just inked a deal with producer Rick Alexander (MGM’s Adventures in the Land of Zametherea) and manager-producer Jeff Krelitz to turn two of his co-creations, Casanova and Last of the Independents, into movies. A major A-list actor is already mulling over the lead in Casanova, an adventure-caper about a thief-turned-spy, which Alexander promises will evolve into a "mega-budget, effects-intensive action spectacular." (He says he’s aiming to unleash the "spectacular" during the Fourth of July weekend 2010.) This is merely the first of what the producers hope will be a Bond-type franchise. Casanova "[will] live on but be played by a different actor each time out," says Krelitz, who notes that the duo will hire a scriptwriter only after securing a star and director. As for the swaggering bank-heist thriller Independent? It already has a screenwriter — that’d be newcomer Alex Litvak — so producers are currently shopping for a director with hopes of an early 2009 shoot.