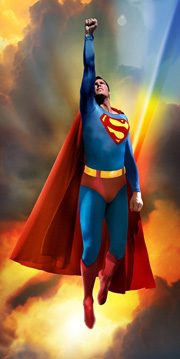 Don’t bother putting on airs, Messrs. Man (Super and Bat); you’re nothing special, not any more. These days, you’re just two more members of a rather large club that includes cowboys, cops, private eyes, combat soldiers and guys who fly space ships to other planets and solar systems and galaxies. Serial killers who slice and dice sexy teenagers are in the club, too. And critters that are normally harmless but mutate into gigantic sociopaths.

While you weren’t looking, you’ve become a genre.
Of course, if we want to get sniffy about definitions, you always were, in comic books. Almost from the beginning, here were cowboy comics and detective (or Detective) comics, and monsters and spaceship jockeys were early joiners, too. And you guys, the superheroes. You were the most popular and emblematic, of the comic book good guys, but you had peers.
Movies were another matter. Oh, you guys showed up on what was called The Silver Screen pretty early in the form of serials or, if we want to get fancy, chapter plays intended for the Saturday matinees, which were populated by kids who, in my memory, made a hell of a lot of racket. Even there, you were a bit of an aberration, outnumbered by the gumshoes and gunfighters, and not deserving, apparently, of cinematic and dramatic niceties. And, while there were cowboys and sleuths aplenty in the movies made for after-dark showings to the kids’ moms and dads, no superheroes ever made the leap to, ahem, serious entertainments.
That changed in 1978 when the ads assured us that we’d believe a man could fly and we paid our money to see after-dark screenings of Superman, by any criterion a Major Motion Picture, and a pretty good one. It was popular enough to merit three sequels, but it didn’t inaugurate a superhero renaissance in the nation’s theaters. In the venues of mass entertainment, guys in funny suits were still an aberration.
Then came the late 80s Batman, and the deluge. Lots and lots of superhero flicks ever since. I’ve lost count of how many a long time ago, and I don’t even know exactly how many new ones I‘ll be able to see between now and September. Four? Five? There are enough superhero movies every year to make them all…well, generic. A kind of movie. The bad news is, that means that none of them are prima faciespecial, simply by virtue of what they are, as was true of the first Superman.
Which doesn’t mean they’re all alike. Oh my goodness, no. There are, and will be, the good and the bad and the great ruck of in-betweens.
My suspicion, based on absolutely no data, is that the superhero craze is in the process of peaking and that soon superheroes will join other kinds of heroes and vehicles and become something we’ll see when we’re in the mood for them. For me, cowboy movies are like that. Martial arts flicks, too. I’m glad they’re available, because they add something to my life, but they weren’t the rare treat they once were.
RECOMMENDED READING: The Hero With A Thousand Faces, by Joseph Campbell.
Dennis O’Neil is an award-winning editor and writer of Batman, The Question, Iron Man, Green Lantern, Green Arrow, and The Shadow – among many others – as well as many novels, stories and articles. The Question: Zen and Violence

will be available this summer, and you can pre-order them now.
Share