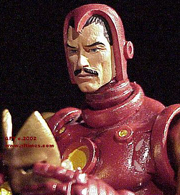 To…oh, say, King Arthur, if he ever existed, you would have superpowers. I mean, look at you. You can travel 100 miles an hour (but that red light flashing in your rearview mirror can’t be good) and you can cause a blank pane of glass to light up and show you what’s happening on he other side of the world, or what happened last week, or both, and you can twist your wrist and cause flame to appear atop that table-thing in the kitchen, with no protracted fussing with flint and stone… To Arthur, it would appear that you’re employing magic.

Living when he did, Art never read another Arthur’s observation that any form of technology sufficiently advanced would appear to be magic, at least to lumps like us. (I refer to Arthur C. Clarke, but you knew that…) So Arthur, (the king, not the science fiction writer) might watch you doing your stuff and conclude that you must be magic and because you’re magic you must be special. He wouldn’t know that you bought your powers, at a discount, at that big, ugly mall about a mile west on the freeway.

Remember, he had a special sword, Excalibur, and he had it because he deserved to have it. And so it was with other talismans, amulets, and assorted weapons and mystic hoo-haws that super good guys got hold of during their adventures down through the ages.

Which brings us to Tony Stark.

Now, for the past several weeks, we’ve been discussing the evolution of superheroes and during our last meeting we looked at the powers of the supers and agreed that mostly they derive from magic or science. The last supersource is technology, which is not exactly science, though it’s a first cousin, and is the least used of the three. Other heroes — Batman comes immediately to mind — have made copious use of gadgetry, but they weren’t about the gadgets, any more than you are about your IPod. (You’re not, are you?) The toys were tools, adjuncts; the hero made them, not the other way around.

Tony Stark, aka Iron Man, has the modern equivalent of a magic object, but without his technology-laden metal suit, he’s just another billionaire. He is a superhero only when he puts on Iron Man’s armor and then he can and does majorly kick butt, but the armor’s the thing. We have to give Tony props for being the guy who invented and perfected the suit, and continually modifies it, but he is not super; the suit is. That concept certainly works well enough for most adventure stories, and I like it as a metaphor. There’s only one problem: anyone who puts on the suit becomes Iron Man, and so Tony is not unique and uniqueness has generally been a prerequisite for the kind of heroism we’ve been discussing. And, theoretically, the next bad guy who slinks down the pike could invent a better suit and open Tony’s can.

So what qualifies Tony as a hero? Anything beyond the armor? I would tentatively say yes. Tony protects and serves the common good, and that’s how everyone since the ancient Greeks has defined heroism. Without what we could call, quaintly, “good character,” Mr. Stark is just another technophile. The computer stores are full of ‘em. With it, he’s hero material.

As in politics, it comes down to a question of who the man inside the suit really is, and it doesn’t matter if the suit comes from a subterranean laboratory or Brooks Brothers.

And might there be real life parallels we could draw? Again, tentatively, I’d say yes, but…ooops–out of space. Darn!

is on sale right now in trade paperback