Marc Alan Fishman: A Chink In The Armor 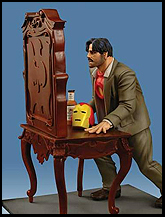 This past weekend I immersed myself in all things Iron Man. I caught the new flick. I watched the first two on cable. I read the new issue of his book. I watched a few passing episodes of his 90s cartoon show as well as some The Avengers: Earth Mightiest Heroes. Throughout all the media Tony Stark has reigned over, it would seem his biggest defect shines though to his core: the man’s worst villain has always been himself. Is this necessarily a bad thing? No, but it certainly creates a struggle to find new ways to make Iron Man interesting.

Before we go further, let’s just assume you’ve seen the new movie. If you haven’t? Go do it. It’s absolutely amazing. Not better than IM1 per se, but leaps and bounds above IM2.

Since we’re on the subject, lets chat about the newest Iron Man flick. Here, Shane Black and his team concocted a very dark, very epic yarn in which they asked the big question at the center of Tony Stark. “Does the suit make the man, or does the man make the suit.” Black obviously chooses to answer just “yes” to that by the time the credits roll up. It’s a sufficient answer. But what it cements is that after three movies, Iron Man’s rogues gallery is woefully terrible.

In Iron Man 1, Obadiah Stane was snarling psuedo-father figure who tragically becomes a CG-piloted mess by Act Three. Because he’d rather start (and bankroll) World War III  than realize that Tony Stark came back from the desert with tech that would make them billionaires twice over. And to think that somehow he could plow his surrogate son onto the LA freeway, murder him, and somehow cover up the murder? A bitter pill to swallow.

In Iron Man 2, we start with a lunatic. This is an improvement over the megalomaniac Stane in that we don’t ever have to feel remorse for a heel turn. But where Stane could be menacing in a suit or super suit, Ivan Vanko, a.k.a. Whiplash (for the marketing tie-ins only), isn’t a threat at any point in the movie. He’s paired with a Sam Rockwell desperately trying to nibble on the scenery before being swept off the stage by the CG nightmare of Act 3. Once again, we’re faced with a fight in darkness between men in powerful suits. The day is won once again with firepower, and a little luck.

Iron Man 3 fires out of the gate with what might be his only namable villain – The Mandarin – only to wink and nod to us that such a racist concept need not be real. While I know this is a polarizing choice, I applauded it. Matt Fraction found a great way to handle the rogue in the confines of the page, but the Marvel Movieverse need not get bogged down in Fing Fang Foom-dom just yet. The bait and switch with Aldrich Killian here was a welcome choice. And for a good long while, I was on board. But again we end up at act three: A fight in the dark where luck, and firepower saves the day.

While it was sure neat to watch molten men fight an army of unmanned Iron Men (I’m not lying, I literally cheered in the theater when the drill Iron Man and black and gold suit showed up), it was all style over substance. Of course it’s the lesson that Tony takes with him as things end up. At the end of the day… all those who have opposed Tony, really only saw him as getting in the way. No man (on film at least) has found a way to be a bigger villain to Tony than Tony himself.

In the comics, it stays just as true. Matt Fraction’s brilliant run on Invincible Iron Man took cues from “Demon in a Bottle” in so much that the best way to create havoc in Tony’s life, is through himself. By using his past, and carefully crafted threats, Tony Stark of the 616 (prior to the Marvel Now initiative) was a man haunted by all the seeds of destruction he planted over the course of countless forgotten years.

By milking this, and enrobing it in new fancy techno-villains? We got a Tony like we’d never seen. And frankly, if you read almost any of my reviews of the book during that five-year run, you’d understand why I loved it so. But even amidst all the shiny bells and whistles of upgraded morts-in-suits, and a much more vicious Mandarin… the book still brought it back to the singular villain of the series: Tony Stark. And just as the movies have smartly ended on him reaching that catharsis… so too have the comics run into that very issue.

And because of it, Iron Man in the comics is suffering. With no Earthly villain left to wage war on, Tony has taken to the stars. And with almost a years’ worth of adventures under his space-belt I have been growing exponentially more bored. Why? Because much like his cinematic adventures… so too do we end up at act threes where firepower and luck prevail. No lessons to learn. Tony is a complete man. And thus far… it’s the chink in Iron Man’s otherwise impervious armor. I hope for all our sakes, someone finds a way to explore that further.