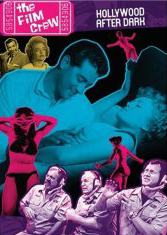 Okay, I admit it. I’m still a fan of [[[Mystery Science Theater 3000]]], the long-running teevee series that featured four robots and a loser riffing on a couple hundred B-flicks… if you’re feeling particularly generous about that “B” part. Michael J. Nelson, Bill Corbett and Kevin Murphy were among the show’s writers and producers. They were also performers – Corbett with the eighth season, Murphy with second season. Nelson, who was head writer from the start, played odd parts for the first four seasons and took over the lead when creator Joel Hodgson left the show at the beginning of season five. The show ran from 1988 through 1999 and begat a feature film.

And I miss it a lot. Particularly after a presidential press conference.

So it was with missed emotions that I popped the first D2DVD by The Film Crew, [[[Hollywood After Dark]]], into my machine. This can’t possibly be as cool as Mystery Science Theater 3000, I thought. And I was only barely right. Nelson, Corbett and Murphy did what they do best: use a contrived reason to sit in a darkened theater and make jokes about a really horrible movie… but without the trademarked silhouette.

If the phrase “sexy Rue McClanahan” sounds like an oxymoron, Hollywood After Dark certainly provides the proof. It is perfectly horrible; it was made for Nelson, Corbett and Murphy to eviscerate. They were fully up to the task, and since the three were also the voices of the featured riffers in MST3K’s last three seasons, if you close your eyes it seems a lot like the original. They only have about half the number of writers, so the material isn’t quite as sharp.

The presentation was bisected by one studio bit, and here’s where I’m having a hard time shaking off MST3K. The ‘Bots had wonderfully wacky and occasionally evil personalities; the Film Crew enjoys its work and is perfectly fine with their environs. No tension, at least not in this first offering.

Shout! will be releasing three more Film Crew D2DVDs this year, and I suspect they’re already looking at their orders and deciding if there will be more. I have great confidence in the Film Crew, and Hollywood After Dark was a good if not great first offering. They will settle comfortably in their new roles.

I recommend this to my fellow MSTies. Yeah, there’s no ‘Bots. Deal with it.