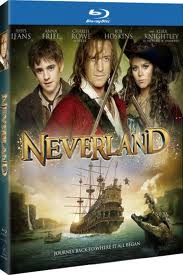 You gotta give writer/director Nick Willing credit. He continues to mine public domain works to give them modern day twists and gets Syfy to pay for them. Overall, these have been largely hit or miss affairs which began way back in 2007 with Tin Man, reimagining L. Frank Baum’s Tin woodsman as a sheriff in Oz with Neal McDonough doing his best with weak material. It was still head and shoulders about the god awful 2009 debacle Alice, that proved Willing had no ear to the lyricism of the authors he was pillaging.

Undaunted, thanks to positive ratings from an undiscerning audience, last winter Willing returned with Neverland, a prequel to James Barrie’s Peter Pan. In this version, it all began centuries ago, when the pirate Elizabeth Bonny (Anna Friel) came upon a glowing orb amongst her spoils and when she tired of it and used it for target practice, it shattered, sending the ship and crew to Neverland, a colorful dimension. We then jump ahead and meet Peter (Charlie Rowe), an orphan; prowling the streets of 1906 London, partnered with Jimmy (Rhys Ifans). When the gang steals the same orb, they disappear, leaving Peter and Jimmy alone. Tracking down the orb’s owner, Peter is taken to Neverland and his all-too familiar adventures begin. In addition to riffing on Barrie, the miniseries also borrows heavily from many of the pop culture genre hits from the last decade.

Bonny is still around, cozying up to Jimmy, whom she now dubs Hook, and in time we touch on all the Barrie tropes from Indians to crocodiles. New characters to the tale include Queen Elizabeth’s alchemist, Dr. Fludd (Charles Dance), who finds a spirit he dubs Tinkerbell (voiced by Keira Knightly). Bob Hoskins reprises his Smee from the misguided Hook film from the 1990s. Overall, it’s an appealing cast doing the best they can with poor writing and unoriginal material.

Producers Robert Halmi, Sr. and Jr. know how to stretch a buck, get just enough recognizable names into the cast for international sales and turn literary classics into Velveeta. The miniseries utilizes tons of green screen work but it’s low budget green screen so isn’t as sharp as it should be. In the conversational commentary by Willing, he goes on at length about working with green screen and some of that is more interesting than the story itself.

The video is an acceptable transfer with fine sound. The miniseries comes with a scant handful of extras beyond the commentary. The best of the lot is the 22 minute Neverland: Access All Areas featureete used to promote the miniseries before it aired. You get a woefully inadequate 15 minutes of The Story Behind the Story: Cast Interviews, and a brief look at Green Screen to Scene; a visually interesting Journey into Neverland: Art Gallery.