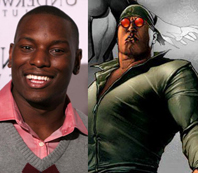 Fresh from the set of Transformers, Tyrese Gibson sat down with the boys over at IGN and spilled his guts on how much he wants the titular role of Marvel’s Luke Cage big-screen project.

"We’ll see, man," he says. "You know, they’re doing the rewrites on it right now. I have not officially signed on to be a part of it, but they have me in mind, so I’m honored."

Having third billing in Transformers may be a big deal, but Tyrese told us that he’d have to step it up even more for Cage. "I’m gonna have to get my body at 199.99 percent," he says. "The Luke Cage fans are out there. I see the emails and the blogs — they want the best for the character. Hopefully, I’ll be that guy… if the script is right."

Kevin Feige, Marvel Studios President of Production, recently indicated that the movie rights to Luke Cage have went back to the studio after Sony couldn’t commit to a "decent" script.

"We never got a script on Luke Cage while it was at Sony that did it justice from our point of view or [director] John [Singleton]’s point of view," Feige says. "The rights since have reverted back to Marvel, but I would love to do a Luke Cage movie — again, looking for ways to continue Marvel movies with fresh content and different points of view. I think Luke Cage would absolutely fit into that."

Of course, we’ll have all the latest as news develops on this project right here at ComicMix.