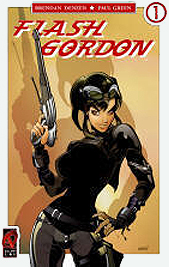 Full disclosure: I had edited a [[[Flash Gordon]]] comics series at one point in my life. It was the third greatest nightmare in my professional life. Not the part about working with the talented and understanding Dan Jurgens; Dan’s a class act and a fine storyteller. No, working with King Features Syndicate was akin to Sisyphus’s task, except the big rock was a huge boulder of shit and pushing it up that mountain happened in the dead of the hottest summer in the innermost circle of hell. And I’ve lightened up on this over the years, too. And so, on with the show.

There may be no greater icon in comic strip history than Flash Gordon. Sorry, [[[Buck Rogers]]]. You came first but Flash had better art and story, and a much, much better villain. Creator/artist Alex Raymond is generally regarded as the greatest craftsman in the field; so great, in fact, that after Dave Sim recovered from producing 300 consecutive issues of [[[Cerebus]]], he started up on a series called [[[Glamourpuss]]] that, oddly, is all about Raymond’s work.

Flash was the subject of what is also generally regarding as the three greatest movie serials ever made due, in no small part, to the performance of actor Charles Middleton as Ming The Merciless. And he had all the other media tie-ins: a radio series starring Gale Gordon (yep; Lucille Ball’s foil), a teevee series staring future Doc Savage model Steve Holland and a teevee series on Sci-Fi last year that was completely unwatchable, various animated series, a movie feature and another one in pre-production and numerous comic books by people including Archie Goodwin, Al Williamson, Reed Crandall, and Wally Wood, and licensed items. When Raymond went off to war, he was replaced by a series of artists nearly equal to him in talent: Austin Briggs, Mac Raboy (my favorite), and Dan Barry.

There’s a reason why Flash Gordon attracted such top-rank talent. Sadly, that’s also the same reason why Flash Gordon is an icon and no longer active in our contemporary entertainment: nostalgia. Flash Gordon was a product of his times, a wondrous visionary made irrelevant by real-life heroes such as Laika the dog, the first living being to orbit the Earth, and Yuri Gagaran, the first human being to orbit the Earth. Only Yuri returned alive, but I digress.

Science fiction was rocked to its core. It took talent like Harlan Ellison, Michael Moorcock, and Gene Roddenberry to re-purpose the genre, to focus more on the social aspects of the genre and extend those concepts out into the future. If you’re going to make Flash Gordon work in the 21st century – or the last four decades of the 20th, for that matter, you’ve got to distill the concept down to its essence and rebuild according to the mentality of our time.

Writer / Publisher Brendan Deneen, and artist Paul Green, aided by co-publisher Richard Emms and the gifted J.M. DeMatteis making his professional debut as editor-in-chief, managed to do just that. Their Flash Gordon #1, by Ardden Entertainment, is very much a product of our times.

The most obvious difference is Green’s art style. This ain’t your great-grandfather’s Flash Gordon. Every expression, every pose, every exaggeration screams “2008.” If you can’t deal with that, give the book a pass and waddle back to the rest home. He’s a good storyteller, and while I could do with a bit less posing, hey, it’s the first issue.

As for the concept, well, Zarkov is still the independent genius tinged with madness and Flash is still the Olympian athlete, but now he’s also a history professor at Yale. He obviously got his muscles after Image Comics bought out the Charles Atlas company.

Dale, who adorns one of the covers in one of those “young Sarah Palin on Cinemax” poses, is a CIA agent on the trail of her friend and former collaborator Dr. Zarkov. As it turns out, there’s a lot more to the CIA than Dale realized.

Here’s what I like best about the first issue, and it’s a little bit of a spoiler. Sort of. Ready? Ming is not pulled out of the hat on the last page of the story. Avoiding that cliché must have taken great effort.

It’s an interesting and very worthy start. I’ll be following the new Flash Gordon series to see how it develops.

Speaking of the serials, look for a review of The Flash Gordon Serials, 1936-1940: A Heavily Illustrated Guide on Monday.