An iPhone Odyssey: My voyage to technological supremacy 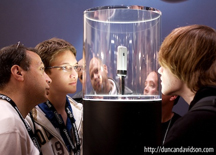 (An editorial note: ComicMixers have no doubt noticed our intrepid crew tends to share certain fannish predilections. Among these is a lust for Apple technology. No less than five of us either ordered or purchased iPhones the day the thing came out. This is the first review; we’ll probably be referencing our experiences in the future. Now we can easily text message each other while getting our Doctor Who fix.)

I decided last week that I needed to have an iPhone. The hype had finally gotten to me, the slick GUI, the web features, all of it. This was further enhanced by my awful experiences dealing with Verizon Wireless and my Motorola RAZR breaking during normal use more than once.

It was no surprise that I reached to Apple in a time of need. Every computer I have ever used on a consistent basis has been an Apple from my parents’ Macintosh SE back in the late 80s to my current MacBook Pro. The thing I believe sets Apple apart from other companies is the concern they have for user experience. This is reflected everywhere from their more elegant operating system to their excellent customer service. The only serious problem I ever had with Apple was my parents’ Power Mac 8100, which had a power supply problem they were unable to diagnose, and plagued the machine for over a year.

The Internet was abuzz with rumors and speculation about how difficult or not difficult it would be to get an iPhone on the first day. I firmly believed I could wait at either Apple Store location in Manhattan and get an iPhone with no problem. However, I thought that waiting outside all day in the heat would be decidedly unpleasant. I turned my attention to Garden City’s Roosevelt Field Mall. It’s an upscale mall with an Apple Store and is the tenth largest mall in the country in terms of space. Certainly they would have room to enclose the line in comfortable air conditioning.

I could not have been more wrong. Standing in line at Roosevelt Field was largely a nightmare. The line was entirely outside on their southern parking garage structure with the overwhelming majority of the line on the top level of the structure, exposed to the elements. The heat and sun exposure got to me, leaving me with moderate sunburn; I was far from alone in that. To treat customers lined up to purchase a $500 item like that is ridiculous. They had space inside and they refused to use it to accommodate us. Mall security defended themselves by saying this was the same way they treated people lining up for the Playstation 3 but those lines were overwhelmingly eBay scalpers.

At 6 PM the lines were gradually let into the store and by 7 I was on my way back to Manhattan with an 8 GB iPhone. The Apple Store had plenty and I believe that one can still walk into any Apple Store in the area and buy one as we speak. Was it stupid to wait in line all afternoon for a product with a seemingly low scarcity factor? Probably, but sometimes it’s fun to be the first person you know to have something cool. I was ready to activate my phone through iTunes and be on my way.

Activation was, unfortunately, another arduous process. The AT&T server seemingly buckled under the strain of all the Mac addicts and stories of long struggles to activate were prevalent. It took my phone nine hours to activate. The iPhone will do nothing until activated so I had a $600 brick until 6:30 Saturday morning.

At that point I could use all of its fantastic abilities except for receiving calls. I was playing around with all of the wonderful iPhone features but every time someone called me I had to dig around in my bag for my old RAZR to answer the call. My number was not transferred to my iPhone until about 11:30 AM Sunday. It’s unclear whether this was a problem with AT&T or Verizon, but it was another inconvenience in a weekend filled with them. Everyone but Apple really screwed up this process and I can’t help but wonder if Apple doesn’t need to be more vigilant in choosing their partners including the malls they choose to put stores in and their cell phone network.

The iPhone, incidentally, is wonderful once it works. I urge everyone in need of a device that does all these things to go buy one as soon as possible. I hear they’re still plentiful at Apple retail locations, although AT&T owned stores by and large sold out Friday night.