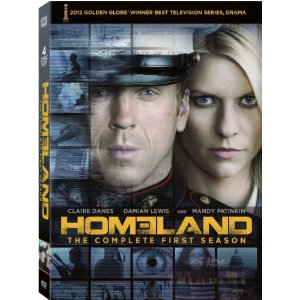 Not since the spy craze of the 1960s have there been so many television series about intelligence agents. There was the late, lamented and still-missed Rubicon and the JJ Abrams misfire Undercover. Currently, there’s the frothy, entertaining Covert Affairs and for those who like their espionage tales with some meat on the bones, there’s Showtime’s Homeland. The second season of the acclaimed series arrives at month’s end, but for now, the first season is just out on disc from 20th Century Fox Home Entertainment.

Anchored by the riveting performance from star Claire Danes, the series explores CIA agent Carrie Mathison and her quest to determine if a returned American POW, Marine Sgt. Nicholas Brody (Damian Lewis), is the real deal or a sleeper Al Qaeda  agent. Sounds simple enough, right? Instead, over the course of a dozen episodes, nothing is as it appears, starting with Mathison herself. When we meet her, she has just returned from an unauthorized operation in Iraq and is relegated to a Counterterrorism post back in Washington, DC. When her Director, David Estes (David Harewood), tells the staff a POW has been found, it confirms a rumor she had been fed about a sleeper agent. Is it Brody? Is it someone else? Are they connected? Already on thin ice from her Iraq mission, she has to investigate Brody carefully because everyone else has declared him a war hero and you don’t accuse heroes of being evil. Mathison only trusts her suspicions with her mentor, Saul Berenson (Mandy Patinkin), and together they covertly investigate Brody.

Without giving away all the exciting twists and thrilling turns, suffice to say that over the season there’s a lot of red herring to wade through along with some excellent writing and performing. The series is filled with a lively, engaging, and rich cast including Morena Baccarin, Jamey Sheridan, Amy Hargreaves, and Navid Negahban. The storyline is an evolving one demanding you pay attention so as not to miss a clue (or strong performance). Nothing is as it appears and as the tension mounts, the audience is left to wonder about Mathison’s own sanity. When Patinkin comes to realize how vulnerable she is, the show shifts into some of the most heartfelt moments. Both are damaged souls and few can play that vulnerability better than these two.

Set in and around Washington provides plenty of pretty pictures but the real strength is in the richness of the storyline. In addition to the main plot, we focus on Brody’s homecoming after eight years away and how that has turned his wife and children’s world upside down. There’s the usual office politics and governmental affairs but it all feels fresh which is to be applauded.

Veteran producers Howard Gordon and Alex Gansa (24) were inspired to create this from the Israeli series Hatufim (Prisoners of War), which is now streaming on Netflix. They were lucky to craft a lead character complex enough to entice Danes back to series television, a move that earned her a Golden Globe nomination while the series took home Best Television Series – Drama. The first season arrived on October 2, 2011 and received 1.08 million viewers which was sizeable and stayed that way, earning critical acclaim with every passing week. Having all twelve episodes to watch once more, without waiting a week in between, allow you to study and notice nuances you may have missed the first time.

The four disc DVD or three-disc Blu-ray sets come with audio commentary and some very interesting deleted scenes that fill in some gaps or let characters breathe. The final disc also has the featurette Under Surveillance – Making Homeland, which is nowhere near as enlightening as it should be. There is also The Visit: A Prologue to Season 2 which you will have to watch and judge for yourself.