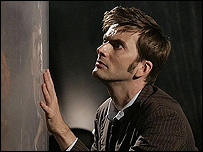 Stringer Lisa Sullivan notes: "Doctor Who is scheduled to be among the programs to be made available on demand via the BBC’s iPlayer service. BBC News says the service will be launched later this year.

People will be able to watch selected shows online for seven days after their first broadcast. Episodes will also be able to be downloaded and stored for up to 30 days. The iPlayer has been given the go-ahead by the BBC Trust after consultations with the public. Initially, the iPlayer application is only available for people with Windows PCs but the trust wants the application to run on different systems within "a reasonable time frame."

It is unclear at present whether access will be limited to UK users, but based on their previous actions with the interactive comic, it’s sure looking like they’re going to try.