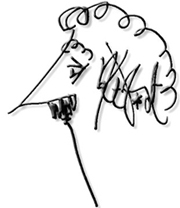 I’d like to say that I was a bit ahead of the crowd in discovering that, while he was a science fiction writer, he was also much more, but by the publication of Cat’s Cradle in 1963 a lot of people had found this wise, sad, funny man – particularly disaffected young people.

He was often likened to Mark Twain and the comparison’s apt. But while I unstintingly admire Mr. Twain (maybe such admiration is in every Missouri-born writer’s DNA), I think Vonnegut’s quality average may be a bit higher. True, he did not write as much as his predecessor – Twain was astonishingly prolific – but he always seemed to be at or near his best. I can’t remember reading any Vonnegut piece that I thought was second-rate.

He was pessimistic without being sour, famous without egotism, and he had compassion completely devoid of sentimentality. Like Mark Twain, he could voice unpopular opinions without offending those who disagreed with him.

The New York Times extracted a quote from one of Vonnegut’s novels, God Bless You, Mr. Rosewater, that can stand as a summation of the Vonnegut doctrine: “There’s only one rule that I know of, babies – ‘God damn it, you’ve got to be kind.’ ”

When F. Scott Fitzgerald’s life was a shambles and he couldn’t fulfill obligations to Esquire Magazine, his editor finally told him to write about why he couldn’t write. The result was “The Crack Up,” one of Fitzgerald’s most interesting pieces. (It includes a line I’ve always liked: “In a real dark night of the soul it is always three o’clock in the morning, day after day…”) Okay, similarly: After writing the first five paragraphs of what you are being kind enough to read, I could think of no 300-word size idea to complete the amount of verbiage I’ve promised to deliver every week.

I don’t think not meeting that goal, once or twice, would be considered a capital crime. I mean, I wouldn’t expect ComicMix’s honcho, Mike Gold, to awaken me swinging an ax, though, of course, you never know. But, as suggested a week ago, if there were a god of deadlines, I would bow to him, or at least nod. Now, I promised myself to deliver every installment of this whatever-it-is no later than Wednesday afternoon which, as I sit in my lovely river town on a (finally!) sunny spring day, is about 24 hours away, and who knows what happen between now and then to prevent me from getting to the keyboard. So, in a highly lame fashion, I am emulating one of my (way) betters and telling you why everything I’ve typed since “kind” has been a waste of your time. And damnit, I’m still short a few words…ooops, no I’m not, not now.

RECOMMENDED READING: Anything by Kurt Vonnegut

. My favorite among his novels is Sirens of Titan

, arguably a better book, a close second. But nothing Vonnegut wrote is likely to disappoint you.

Batman, The Question, Iron Man, Green Lantern and/or Green Arrow, and The Shadow, as well as all kinds of novels, stories and articles.