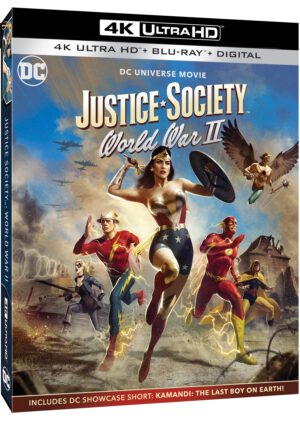 Comic fandom has crossed so thoroughly into the mainstream, that mass media is proving elastic enough to encompass what was previously considered the obscure. Case in point, the just-released Justice Society: World War II direct-to-video film. Here is a story focused on the first comic book team that finally gets the spotlight after making cameos and guest appearances on animated and live-action television productions dating back to Smallville.

I personally love the JSA and was thrilled they were getting a film of their own. Unfortunately, the finished product is not the JSA we know, nor is it a particularly good piece of storytelling. Producers Butch Lukic and Jim Krieg apparently started this project as a Wonder Woman in WW II story that morphed and was appended to the parallel worlds concept.

We start on what we presume is the DCAU world as Flash (Matt Bomer) comes to aid Superman (Darren Criss) but clearly, it’s not our familiar world because there is no JLA. As the Scarlet Speedster tries to save Superman from a kryptonite missile fired by Brainiac

, he winds up piercing the dimension veil to find himself not only on a parallel world but back in time.

Along the way, the modern-day Flash is slow to figure things out and the others view him askance until his older counterpart offers up the multiple worlds theory and then he’s one of them. Tagging along is a war correspondent, nicknamed Shakespeare, but it is actually Clark Kent, but a man whose adoptive parents, the Kents, died young and he was raised in an orphanage with a jaundiced view of using his powers for a humanity that has not been kind to him. 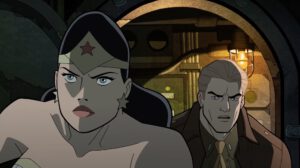 And of course, there’s Steve Trevor (Chris Diamantopoulos), the audience’s human connection to the story. Here, he’s accomplished and heroic, but hopelessly devoted to Wonder Woman, proposing to her daily. He’s probably the best thing in the film.

As we shift into the second half of the film, the real threat is presented in the form of The Advisor (Geoffrey Arend), who has taken mental control of that world’s Aquaman (Liam McIntyre). He’s out to conquer all, which is a brutal way to end the global conflict. At least it’s a threat worthy of super-heroes. So, as we build to the climax, there’s death, destruction, and lots of predictable moments.

Along the way, the heroes are never given a chance to be developed as characters. Audiences are left wondering as to the cherry-picked nature of the team, why this Canary has the sonic scream, why does Jay Garrick know about the Speed Force but Barry, who comes across as a dim bulb, does not. Of all the JSA characters present, the one receiving the worst treatment was Doctor Fate (Keith Ferguson). 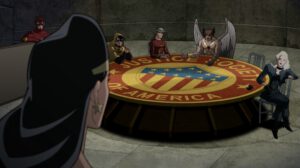 Director Jeff Wamester and screenwriters Meghan Fitzmartin & Jeremy Adams could have done so much more with the source material, but what is presented here is soulless and unsurprising. The animation looks more limited than usual, which takes away from the enjoyment.

The 1.78:1 high-definition film looks sharp with good colors in what is a generally muted palette, bringing the horrors of war nicely to life. The video is nicely complemented by the audio.

The director, producers, and screenwriters sit around congratulating themselves in Adventures in Storytelling (30:04), where they explain their choices and touch on the ideas they brought to the production, but it didn’t translate from idea to execution anywhere near as well as they think.

We also have Sneak Peek: Batman: The Long Halloween Part 1 (10:29) which is being touted as being the most faithful adaptation from a comic story. It certainly looks great with strong visuals and an interesting voice cast including the late Naya Rivera as Catwoman.