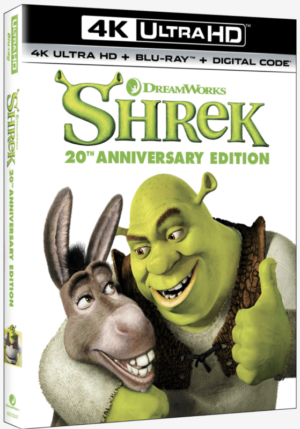 The best thing about Shrek when it debuted 20 (yikes!) years ago was that it brought a fresh take on traditional fairy tales and got a generation of children to understand that there were more ways to tell these classic stories than the Disney way. The humor here was contemporary and original while still respecting the lessons these were designed to convey.

Now, celebrating the 20th anniversary of its release, Universal Home Entertainment has spruced up the original film for its 4k Ultra HD debut. It comes in a combo pack with the Blu-ray disc and Digital HD code.

It’s still funny, with Mike Meyers affecting a fine Scottish accent for the title character, paired with Eddie Murphy’s memorable Donkey along with Cameron Diaz (Princess Fiona), John Lithgow (Lord Farquaad), and Vincent Cassel as Monsieur Hood. To protect the swamp home of the ogre and its other denizens, Shrek takes on the evil Lord, rescues the princess, and a fine time is had by all. The music sells itself and there are funny moments throughout, still making me laugh.

While the CGI animation hasn’t aged as well as some other productions, Shrek is still good to watch and Universal gets credit for cleaning it up as best it could for both the 4K and Blu-ray discs. The color balance is nicely improved along with the depth of field.

The DTS:X Master Audio soundtrack is perhaps stronger, so you can enjoy the music, dialogue, and sound effects.

Given the film’s smash success, it spawned several sequels (none yet in 4K) in addition to television shorts, music videos, and related fun. Much of it can be found on the two Blu-rays discs in the set. There is actually no new content produced for the anniversary edition, just collecting previously released material. You can decide for yourself if the upgrade in the film itself is worth the investment.

On the 4K Ultra HD disc, you can find several of the original Blu-ray features: