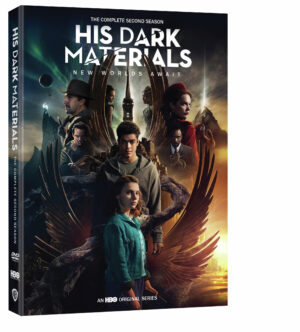 BURBANK, CA – Embark on an incredible adventure into a parallel world when Warner Bros. Home Entertainment releases His Dark Materials: The Complete Second Season, the critically-acclaimed original fantasy series from HBO, on Blu-rayTM and DVD June 29, 2021. Adapted from the second book of Philip Pullman’s epic trilogy, which has sold over 22 million copies worldwide, His Dark Materials: The Complete Second Season features all seven episodes from the exciting second season plus over an hour of special features including an all-new never-before-seen featurette. The release will be priced at $29.98 SRP ($39.99 in Canada) for the Blu-ray, which includes Digital Copy (US Only) and $24.98 SRP ($29.98 SRP in Canada) for the DVD. His Dark Materials: The Complete Second Seasonis also available to own on Digital via purchase from digital retailers.

His Dark Materials follows young orphan Lyra (Dafne Keen) on a journey through a parallel world where a human’s soul exists outside one’s body – in the form of a talking animal called a daemon. Season two begins as Lyra, distraught over the death of her best friend, embarks upon a journey in a strange and mysterious abandoned city. There she meets Will (Amir Wilson), a boy from our world who is also running from a troubled past. Lyra and Will learn their destinies are tied to reuniting Will with his father but find their path is constantly thwarted as a war begins to brew around them. Meanwhile, Mrs. Coulter (Ruth Wilson) searches for Lyra, determined to bring her home by any means necessary.

, outlaw or rogue, who through bravery, loyalty, and rebelliousness are willing to stick up for the underdog and fight for justice.

The second season of His Dark Materials is now available to own on Digital. Digital purchase allows consumers to instantly stream and download to watch anywhere and anytime on their favorite devices. Digital movies and TV shows are available from various digital retailers including Amazon Prime Video, AppleTV, Google Play, Vudu and others. A Digital Code is also included in the U.S. with the purchase of specially marked Blu-ray™ discs for redemption and cloud storage.