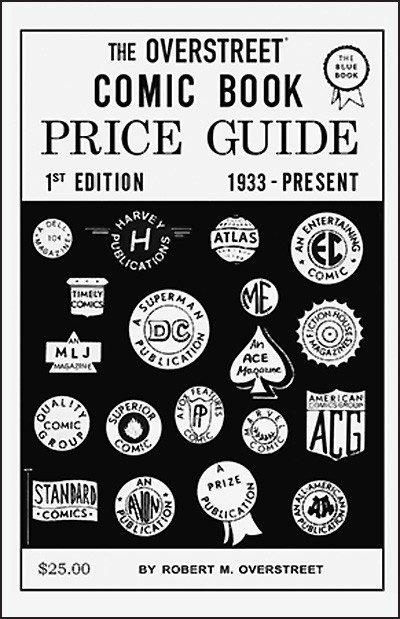 Finally, a time machine for me!

Most folks visiting this site know about Dr. Doom’s Time Machine, the Guardian of Forever from Star Trek or that little book written by Herbert George Wells called The Time Machine.  Or at least they know about that fantastic DeLorean that Marty McFly drove.

Well, there’s one more Time Machine to add to the list – Gemstone Publishing’s The Overstreet Comic Book Price Guide #1 Facsimile Edition, a reproduction of the very first Overstreet’s Price Guide published in the fall of 1970. What a treat it is! This book is, at the core of it all, a snapshot of old comic book prices.  But faster than you can say “Why, oh, why didn’t I buy multiple copies of Fantastic Four #1 for $30.00 back in 70?”, you realize it’s so much more.

This is also a celebration of fan-focused entrepreneurs (Fantropreneurs?) grabbing the reins of their industry. This was the time when fans, and especially one fan named Robert M. Overstreet, rolled up their sleeves, researched meticulously and published an industry bible that would become both a tradition and the foundation upon which a million collections were built.

There’s an important thing to remember. Back in the “old days”, when you finished with something, it was discarded. As a society, we didn’t collect or save magazines or comics.  My Italian relatives would save bottles and paper bags, but comics didn’t quite fit into that category. There were collectors, but they were either breathing rarefied air (e.g. Art Collectors) or they were weirdos… who’s maturity was obviously stunted.

But the Guide, in assigning values to comics in such an authoritative way, publicly established economic value for comics. The outside world could respect that. Society back in the sixties or seventies might not have cared if Captain Marvel debuted in Whiz Comics #1 but they did care if an old funny book, with a newsstand value of 10 cents, was suddenly worth $235.00.

“Oh, if only my mother hadn’t thrown them out!” laments every non-collector.

(Note to my mom -thanks for never throwing out my comics. But I am still bummed you sold my Major Matt Mason Space Station at a garage sale.)

Beyond the prices, this facsimile edition also showcases ads that, once ubiquitous, have now morphed into curiosities. Passaic Book & Comic Center has the first ad in the book. And it’s fun to recall when Big Little Books were an adjacent collectible. (There don’t seem to be too many collectors any more, but I hope I am wrong.) And surely mail order legend Robert Bell deserves his time in the historical spotlight.

I’m so glad Gemstone’s VP of Publishing J.C. Vaughn and his team pushed for this delightful reproduction. Flipping through it sends me back in time, back when the world was shiny and new and full of potential. Or at least comic collecting was.