The Law Is A Ass #427: The Flash Sings Happy Trials To You 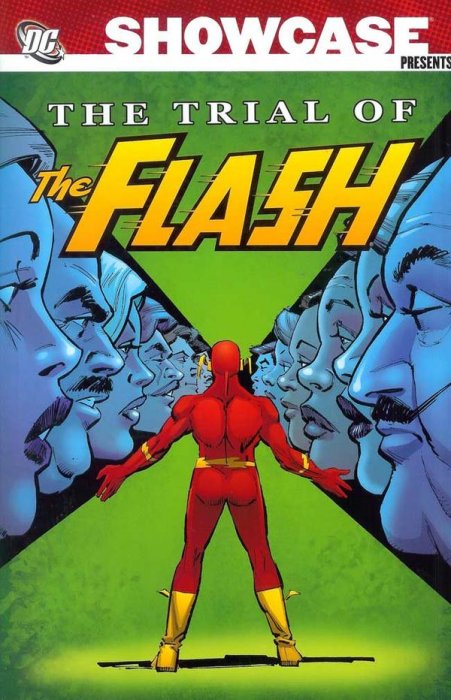 So what do you do when you’re feeling nostalgic? If you’re me – and luckily for me, I am me – you write about The Trial of the Flash. No, not the one from 1983, the one from last month. On the TV series The Flash.

So let’s get you up to speed; pun intended. This season Team Flash is fighting Clifford DeVoe, AKA The Thinker, a genius who’s one coyote away from being a super genius and orchestrating some sort of season-long master plan to hector The Flash.

And here’s where we start getting into SPOILER ALERT! territory. I’m about to reveal important plot details from several episodes of The Flash. Why? It’s in my job description. Right after wise ass. If you’re one of those people who don’t watch a show until the DVD set comes out or you binge it on a streaming service, so aren’t current with the current season of The Flash, you might want to stop reading now. The column will be in the archives so you can read it after you’re all caught up. And that way you come here twice so I get more hits.

After The Flash finally figured out DeVoe was the big bad this season, he changed into his secret identity, Barry Allen Central City Police forensic scientist, to question DeVoe. Which played right into DeVoe’s hands. DeVoe had orchestrated events to cause Barry to confront him. DeVoe further manipulated Barry into continuing to confront DeVoe and DeVoe’s wife, until the DeVoes were able to get Barry’s boss Captain Singh to issue a restraining order against Barry. Next DeVoe transferred his consciousness into a man named Dominic Lanse, because DeVoe’s super brain was sapping all the energy from his body, making it atrophy and become paralyzed. DeVoe didn’t want his old body anymore, but he still had a use for it. After the mind transfer, DeVoe/Lanse took his former body to Barry’s apartment, stabbed it with a knife that was there in the apartment, and arranged for the police to find Barry standing over the lifeless, bleeding body of Clifford DeVoe. Presto, the framed Barry was on trial for murdering DeVoe. Now I know I said DeVoe orchestrated these events, but for DeVoe’s manipulations to work, Barry had to act like a complete idiot. So maybe I should have said DeVoe string quarteted them.

According to the show, Barry was arrested on Christmas Eve, 2017. His trial started when The Flash came out of its winter break on January 16, 2017. Which, uh, no! The Constitution guarantees everyone a speedy trial, but that doesn’t mean that the trial starts a few weeks after arrest, giving no one enough time to prepare. Even in the Arrowverse, trials aren’t as speedy as Speedy Gonzales. (You were expecting me to say as speedy as the Flash. Psych!)

On the other hand, considering how poorly Cecille represented Barry, the prosecutor’s office wouldn’t want to disqualify her. It probably welcomed her with arms more open than a Walmart on Black Friday.

The trial started with a montage of scenes in which Anton Slater, the prosecutor, lectured the jury. I’m assuming he was delivering his opening statement. Either that or he was testifying himself, because there wasn’t anyone in the witness stand. As I don’t think even the most careless of Hollywood writers would actually have a prosecutor testifying, we’ll go with opening statement.

Slater’s opening statement was a bit more complete than most. Opening statements give the jury a general overview of what each side expects its case will prove, not every detail of their case. If you give away your whole case in the opening statements, then the jury won’t pay attention when the witnesses testify. And if they’re not paying attention to the witnesses, how will the jury hear it when some witness confesses that he killed the victim? (Oops. Wrong show.)

About that restraining order that the DeVoes obtained against Barry. Captain Singh, Barry’s boss in the Central City Police Department, testified that he issued it on behalf of the DeVoes. Which he didn’t. Restraining orders are judicial orders that judges issue after hearing evidence detailing why the person seeking the order needs some other party restrained from doing something. The judicial branch issues restraining orders and the executive branch, through the police, enforce them. Singh could have given Barry a formal reprimand. He could have ordered Barry to stay away from the DeVoes as a matter of departmental policy. But unless Central City is in the habit of bouncing checks and balances, Singh wouldn’t have issued a restraining order against Barry.

So far we’ve had all of that, and I’m just getting started. Literally. I’ve just started covering this episode of The Flash. I won’t finish until next column. At least I think next column. Based on my notes, it might take longer to write about the trial of The Flash than the actual trial.