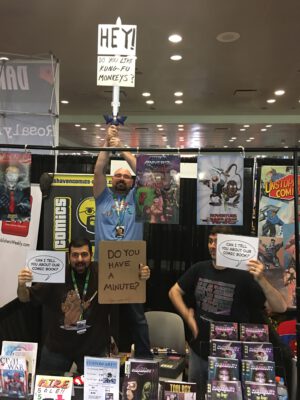 As you, my gentle readers, peruse this article, my Unshaven cohort Matt Wright and I will be on the road for the last time in 2017. We’ll be showcasing our wares at the annual Kokomo Comic Con in Kokomo, Indiana. We’re pleased as punch that this year we lured ComicMixers Mike Gold and John Ostrander down with us. Denny did it a few years ago, and it appears he didn’t have anything but nice things to say – hence Mike and John agreeing to make the trek out. I’ll cover how that show goes next week. For now, I want to jump into the way back machine to last week when my full Unshaven Comics crew and I descended once again on New York City for the ReedPop colossus known as New York Comic Con.

New York Comic Con is an undulating mass of humanity crammed into the Javits Center for four full days of geekery. This year, rumor has it over 200,000 attendees amassed amidst hundreds (if not an actual thousand as one fan postulated) of exhibitors and artists. Unlike previous years, the Artist Alley was nearly one third its original size – as the Javits renovates the pavilion wherein said Alley assembled in previous iterations of the con. Unshaven Comics specifically popped up our booth in the small press area on the main floor. We were luckyish to have landed in the same spot as 2016.

Let’s start with the cons so that we may build to up to the pros. This is especially easy as we had a very good show, mind you. But nits should always be picked, my friends.

The biggest concern for Unshaven Comics remains our classification with ReedPop. While yes, Unshaven Comics is a small independent publisher of original comic books, graphic novels, and art, we don’t necessarily consider ourselves to be Small Press. There is a stigma that the label of Small Press carries with it an odd “chip on the shoulder” mentality. To be Small Press, as some fans see it, is to be defiantly not-one-of-the-big-boys. Unshaven Comics certainly isn’t Marvel, DC, or anything even reasonably close to it. We are three best friends putting out a single series of comics. We are, in our own minds, merely an Artist Alley table that couldn’t fit down in the Alley. But I digress. This classification simply led to times throughout the convention when the waves of fans washed past our booth as they made way from one exhibition hall to the next. We were displaced barnacles willfully ignored by schools of fish traveling to deeper waters. Nothing hurts more than being ignored.

But our fans – and yes, this year proved to us that we did in fact have them – made way to find us. Over the course of 4 days, we bearded brothers-from-other-mothers pitched The Samurnauts to 699 people. 321 of them purchased 540 books. In addition, Matt and I both took several commissions, and Kyle was able to sell plenty of copies of his book Toolbox. In terms of the raw numbers? Unshaven Comics is plenty happy. With our friendly neighbors – Unstoppable Comics (look them up!) and Publisher’s Weekly – when fans took the chance to stop and hear us out? Well, it worked out just fine for the lot of us.

The biggest takeaway for me personally came in the projections for our Unshaven future. As we’ll collect The Samurnauts: Curse of the Dreadnuts into our first graphic novel here at the tail end of this year, our numbers tell me that next year’s New York Comic Con will potentially see us move 75-100 of said graphic novels. And knowing the difference in profit between floppy copies and a trade (an article to come, I assure you)? Well, that makes me smile from ear to ear.

Beyond raw sales though, what will leave a lasting impression on me this year will be the subtle shifting of my l’il studio in the indie space. This year saw Unshaven Comics rubbing elbows with ComicMixers Joe Corallo and Molly Jackson. Our wonderful host Glenn Hauman whispered a few cryptic thoughts in our ears of future projects to consider. We broke bread once again with Mike Gold, Martha Thomases, and several other friends of the ‘Mix.  More than any year prior, 2017’s New York Comic Con felt lived in for Unshaven Comics, in the best way possible. Gone were the nerves and that quivering question are we just faking it until we make it? Replaced; hardened by New Jersey Transit Tickets, Street Cart Chicken Kebobs, and Brooklyn Hipsters slapping our stickers to their poster tubes. All of it coalesced into a gestalt of limited-but-contented success.

While we didn’t beat any previous sales records (not being literally across from Marvel’s booth will do that to you…), we did prove that we’ve the mettle and drive to define our success in the comic industry. Tune in next week, when I contrast the sea-of-humanity to the most human show we table-up for. ‘Nuff said.