United States District Judge Janis Sammartino dismissed the trademark claims under the doctrine of nominative fair use, and largely agreed with ComicMix’s position that fair use protects the book from copyright infringement claims. Judge Sammartino found that the book is “a highly transformative work that takes no more than necessary [from Dr. Seuss’s books] to accomplish its transformative purpose and will not impinge on the original market for Plaintiff’s underlying work.” She emphasized that the case has broader significance: “This case presents an important question regarding the emerging ‘mash-up’ culture where artists combine two independent works in a new and unique way. … Applying the fair use factors in the manner Plaintiff outlines would almost always preclude a finding of fair use under these circumstances. However, if fair use was not viable in a case such as this, an entire body of highly creative work would be effectively foreclosed.”

As an example, Judge Sammartino refers to this image: 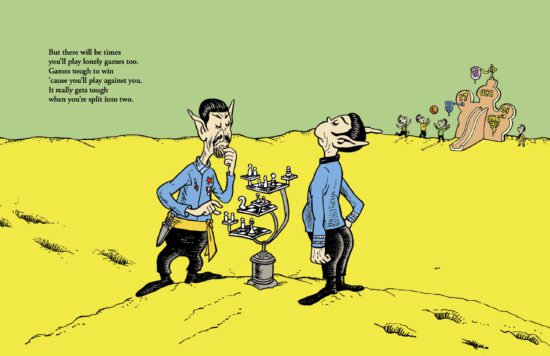 Plaintiff’s work depicts two similar-looking, fanciful “Zax” creatures arguing in the middle of a desert, with footprints to mark their arrival. Boldly takes the same desert landscape and footprints, and in the fanciful creatures’ place puts two similar-looking beings of seemingly Vulcan descent—one of which is drawn in the same position as his Dr. Seuss counterpart and one of which is transformed from the Dr. Seuss creatures’ aggressive stance into a contemplative pose—deep in the midst of playing some type of alien board game. Additionally, Boldly’s text reveals that the two Vulcan creatures are, in fact, the same person, unlike Go!’s distinct “North-Going” and “South-Going” Zaxes. Boldly therefore transforms the argumentative Zaxes and their corresponding depiction into a cloned Vulcan matching wits with himself over an alien boardgame. One Vulcan is positioned almost identically to his Zax counterpart to “conjure up” the Dr. Seuss work, while the other Vulcan is drawn anew and a board-game added in order to fully accomplish the work’s overall transformative purpose.

The copyright claim survives, awaiting proof of any harm to the Dr. Seuss estate’s licensing opportunities, and the estate was given two weeks to amend its trademark claims.

Dan Booth of Booth Sweet LLP, ComicMix LLC’s lead counsel, said, “I have never seen a case so focused on mash-up culture — and so strongly supportive. Judge Sammartino’s decision implicates not just literary hybrids but music remixes, appropriation art, supercut videos, and more, strongly suggesting that they should be protected from copyright claims.”

Oh, the Places You’ll Boldly Go began as a highly successful Kickstarter campaign, written by Gerrold, a Hugo and Nebula Award winning science fiction author perhaps best known for writing the Star Trek episode “The Trouble With Tribbles.”  Ty Templeton is a veteran Eisner Award winning comics artist known for his work on Batman, The Simpsons, and as the co-creator of the Vortex Comics series Stig’s Inferno.

ComicMix publishes a line of graphic novels by some of the best new and established talent in the industry.  ComicMix Pro Services works with creators to produce, publish and market their work in a competitive marketplace.  In addition, ComicMix runs one of the Internet’s most popular pop culture news sites.