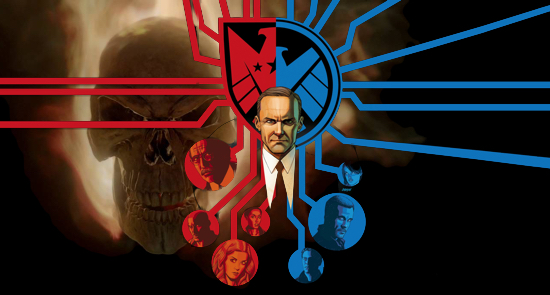 As we wind things down on the current season of TV, I’m of two different minds on two shows I’d long held in similar regard. Agents of SHIELD (no, I don’t want to add all those extraneous periods. You know what I mean, right?) and The Flash. Both turned in seasons that were rife in comic references. AOS gave us Ghost Rider, LMDs, Madame Hydra, and a dash of the non-Marvel-sanctioned Matrix. The adventures of Team Flash gave us… Flashpoint. I am nothing if not full of opinions on both.

Let’s start with the good, shall we? For the first time in the history of the show, Agents of Shield dug its heels in deep with reverence to the pulpy source material. Because of this, the normally cinema-by-way-of-a-limited-budget show felt larger than ever. With pronounced arcs carrying through a disjointed season, we finally got a TV show with the pacing and payoff akin, truly, to actual printed comics. We had a genuine drive from the beginning to end – allowing the final beats of the season to encompass literally everything that came before it. The means justified the ends, and by the time the stinger for the 2018 season drops, we’re exhausted in the best way.

Beyond the prowess of the prose, where AOS shined brightest came collectively in character development. Over the course of this season, nearly each member of the team was given an arc to follow. And while perennial favorite Phil Coulson was left with the least to improve upon, even he was given a few badass moments to chew the scenery on. With Phil mostly on the dramatic sidelines this time around, the MVP of the season falls solely on Iain De Caestecker’s Leo Fitz.

Where he and co-science-bro (by-way-of-Sam-and-Diane) Jemma Simmons were once the bright-eyed innocents of the team, Fitz was saddled with the most growing up to do over the lengthy season. Shouldering the moral arguments of science-over-dogma, followed by a What If conceit Stan Lee himself would have been proud to take credit for, left our Scotsman bereft of any remaining innocence by season’s end. That the writers of AOS make the gravitas of Fitz’s arc feel deserved stands out as the season highlight for me.

You’ll note we’re three paragraphs in, and I’ve not had a single good thing to say about The Flash. Sadly, much like my thoughts around the literary basis of the arc, Flashpoint does for the TV show the same as it did for the comic and animated feature: drag the whole series down into the muck and mire that plagues DC all too often these days.

Simply put, The Flash’s best moments all contained themselves in the singular episode that largely snuck away from the timeline-altering plot that drove the entirety of the season. The Supergirl crossover episode that showcased Grant Gustin’s singing chops, Duet, stood alone as the single point of light in a dreary season.

As with the source material, The Flash saw Barry Allen time-travel to the past to save his mother from her timely demise. By doing so, we entered an Elseworld tale that spins out like so many would-be DCU alternate timelines. Things are darker, grittier, sadder, and devoid of the humor and spritely spirit that has long been the calling card for the show’s continued success. And by doing so, and pitting Barry Allen against yet another Speed-Based-Villain for the series… we are treated to yet-another-plot wherein Barry must. Run. Faster. Except this time, he merely gets by with a little help from his friends.

Speaking of… Not to continuously drop elbows on a dead Beta Rey Bill here (sorry, I know I’m crossing the streams, but I don’t know any more famous comic book horsies), but Team Flash is as much to blame over the dead-in-the-water season as any linger ties to Flashpoint itself. Whereas AOS took time to build, and rebuild their continuously expanding team – taking time to really allow the audience to get into the heads of Mack, Yo-Yo, and even The Patriot – The Flash seemed content to heap team member after team member into Star Labs without ever expanding each character beyond one or two notes they began with. Be it Wally West, that one scientist who HR Wells loved, or Malfoy CSI (I think his name is Julian, but he’s not worth the Googling), basically every Flash-bro walked into Star Labs, delivered or received a litany of pep-talks about their value to the team, and then sat back to let Barry run and mope. By the season’s end, I felt a connection to every Agent of Shield. I left The Flash wishing I had any feelings whatsoever.

At the end of the day, we know both shows will return for another season. My hope is that Barry and his team will return to the real roots of the character – the fun, and hope – and largely forget as much of the Savitar saga as metahumanly possible. As for Agents… Heh. Well, let’s just say Coulson did his job; I can’t wait to see where they go from here.