The Law Is A Ass #309: Reverse-Flash Belongs In The All-Whiners Squad 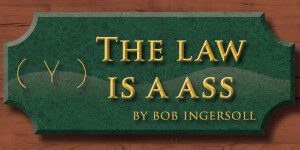 I don’t know whether he was a super villain or a sommelier, because in his origin story Reverse-Flash served a rather poor whine.

Daniel narrates his own origin and makes a real sob story out of it. His mother died in childbirth. Daniel’s father blamed Daniel for his wife’s death so hated him. Daniel hated daddy back. Daniel did, however, love his sister, Iris West; yes, that Iris West. Daniel pushed his father down the stairs and daddy became a paraplegic. Then Daniel’s relationship with Iris soured. (Can’t you just feel the tears welling up?)

Years later, Daniel joined a criminal gang but his sad lot in life didn’t improve a lot. He and his crew committed armed bank robbery on the day that the Flash made his debut. After a high speed chase, which included the gang shooting from their moving getaway car, they became Flash’s first collars. Then, because Daniel was “over eighteen years old – by two days,” he was tried as an adult and sentenced to five years in prison. (Boo freaking hoo.)

After he served his sentence, Daniel landed in the middle of a battle between Gorilla Grodd, who was invading Central City, and Flash’s Rogues Gallery. During the course of super human events, Daniel crashed into a Speed Force battery, which exploded giving him and several people around him the ability to tap the Speed Force. Danny’s power was that he could go back in time.

Now Daniel hunts down anyone who can tap the Speed Force so that he can kill them and gain their power. Not because there can be only one, but because the more Speed Force he gains, the farther into the past he can travel. And he wants enough to go far enough into the past that he can kill his father before he paralyzed his father. Not for revenge, mind you, but so he can regain the love of his sister.

But why, you may ask am I writing about Daniel – No, not Daniel, Danny; he doesn’t deserve an adult name! – West’s sad past. After all, this is “The Law Is a Ass” not a whine and jeez Party. It’s because of one very specific whine Danny made. His lament that “Naturally, being over eighteen years old – by two days – landed me in the state pen. Some luck, huh?”

Well, yes, Danny, you were an adult; even if only by two days. So does it surprise you that the law treated an adult like an adult? If so, perhaps a refresher course in the rationale behind juvenile law is necessary. Although it’s probably not a refresher course. I bet you didn’t learn this, or much of anything else, in the first place.

American jurisprudence is founded upon the concept of moral culpability. In order to commit a crime a person must have a combination of both a criminal act, that is the illegal thing being done, and a criminal intent, that is the intent to commit the act while knowing it is illegal. For this reason if a person commits a crime but has a mental illness and doesn’t know the wrongfulness of his act, thus has no moral culpability, the law judges him to be not guilty by reason of insanity.

In the same way, the law presumes that young children don’t have a sufficiently developed sense of morality – of right and wrong – to be able to realize that what they’re doing is a crime. So they, too, lack moral culpability. People under the age of majority – 18 in most states – who commit crimes are prosecuted under the juvenile justice system, a system which treats them less harshly, because of their presumed diminished ability to distinguish right from wrong.

But when you reach the age of majority, even if it was only two days ago, the presumption of youthful indiscretions is gone and you get charged as an adult. So boo hoo to you, Danny.

In the case of our boy Danny, we’re talking armed bank robbery followed by a high speed chase through city streets in which his gang was shooting automatic firearms out the car window. These crimes show a wanton disregard of human life, as either the Flash or the proverbial innocent bystander could have been killed by the gunshots. So even if Danny had been under 18 by even a couple of years – and as he was the driver of the getaway car, we’d be talking about only a couple of years younger than 18 – the odds are he would have been tried as an adult. In fact in Ohio, once a juvenile court found probable cause that Danny had committed armed robbery with a gun and was 16, it would have been required to bind him over as an adult.

So boo hoo, Danny. Sucks to be you. Sorry I didn’t like your whine. Guess I’m just a Brut.