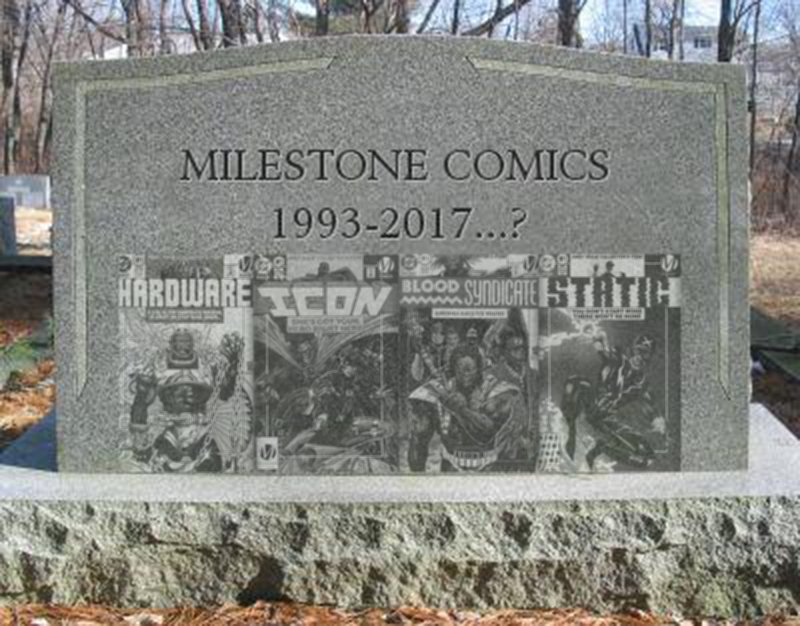 More than 20 years ago my swagger caused a rift between DC Comics and myself and that caused problems between DC and Milestone.

The pressure was put on Milestone to silence me. Silence me from what you ask? Calling DC Comics on their shit is what.

I gave up a significant income to concentrate on Milestone.  DC was in breach of my deal, and as a result, I lived more than a year on my savings waiting for these people to pay me.

I did well, and my lifestyle conveyed that. My wife and I moved three times in just as many years. Our space got more luxurious until I found a loft, so dope (throwback slang it means fucking fantastic) thought I’d never want to leave there.

If Milestone wanted to impress anyone those meetings took place in my new loft. That lifestyle was not because of comics my principal revenue source was from my work as a mainstream illustrator and speaker.

It’s important to the story to remember my standard of living when I decided to be part of Milestone. Yes, I would take a big hit financially to follow Denys’ dream, and I did so willingly as did Christopher Priest, Derek Dingle, and Dwayne McDuffie.

Priest left for an editorial gig at DC. Derek, Dwayne, Denys, and I stayed. We all signed pay or play agreements. Simply put, DC would guarantee income to the Milestone partners to sustain their standard of living in the event Milestone could not. Denys, Dwayne, and myself would be paid for our creative work on the comics and not take salaries. In other words, my “salary” would be for writing and drawing Static, Denys’ income was for illustrating Hardware and creating the Milestone covers, Dwayne from writing Icon and Hardware.

In the event, any partners had to utilize our ‘pay or play’ option DC had the choice of assigning us to work or just writing a check. Hence the meaning ‘pay or play’ either way they had to pay us for something or nothing.

While still in development a young artist in my mentor program had gotten so good I suggested he draw Static. John Paul Leon’s unique style fit much better than my photo-referenced artwork. I was to move over to Blood Syndicate, that was perfect for me. I would still write Static but join Ivan Velez Jr. on Milestone’s super gang book, so both streams of income still in place.

Then walked in Robert Washington.

Robert was so much better than I for Static. His energy and ideas were simply incredible. I may have created the Static Universe, but no doubt whatsoever it was John and Robert’s world. Dwayne asked, and I readily agreed to let Robert do the first story arc.

My Milestone income was cut in half then cut to zero when the decision was made for Larry Stroman to draw Blood Syndicate. I worried not because I could always petition DC to use my pay or play and I did.

I never got paid, but DC did try to play me.

Unless you’re my wife or lover girlfriend or mistress fist date or Salma Hayek, you don’t get to screw me. DC tried by ignoring me for months the clear message was to make me leave.

Back in the day, I was sure DC’s problem with me was growing pains and after some time would be resolved. With the future in mind, I committed all to my role at Milestone and got to work

It’s more than fair to say I earned all that money DC didn’t pay Milestone to pay me. I worked tirelessly and was happy to do so.

Happy until I came home one day saw my wife sitting on the couch crying.

After years of telling her not to worry she allowed herself to believe we were not living beyond our means. That day she got a call from the bank she had bounced a check.  I never told her about the Milestone money issue or how much less I would be making if. I had plenty of money in the bank and the pay or play so why upset her?

Just like that, it was a year later and that money in the bank all but gone.

My ex-wife is Cuban, first generation to be born in America. Her parents were wonderful, hardworking people who barely escaped Castro with their lives. They came here wanting nothing but a chance to give their children a better life in the greatest country in the world.  I sat beside her explained what happened to all our money and promised to do whatever she wanted.

What she wanted was to leave the loft, which I LOVED but not nearly as much as her.

There were a million ways I could have kept that space. But I knew it wouldn’t matter if Ed McMahon showed up the next day with a Publishers Clearing House check for ten million dollars. To her, that loft was an extravagance we didn’t need.

The next day I told Derek Dingle to fix whatever fucking problem DC had with my deal. I was livid, and he knew I was a step away from calling those motherfuckers directly.

Derek resolved nothing; it got much worse.

It didn’t help voicing my indignation either. Doing so was putting Milestone in a less than ideal position. I was a pain. DC wanted me gone, and my three former partners were in no position to do anything but co-sign.

DC Comics got their way…or so they thought. When the word got around I was available offers came in from Disney Universal and Motown. I decided to go with Motown. But there was a hiccup. During my background check, a letter sent to Motown was meant to destroy my deal.

Business Affairs at DC sent a letter saying I was still under contract at DC. That was an outright LIE and sending that information was perhaps criminal. DC was given copies of my Milestone release which they happily signed off on it months before.

Knowing I had every right to negotiate with Motown, yet sending a letter stating I couldn’t, certainly looked unlawful. Illegal or not, that was an atrocious thing to do. Clarence Avant, then Motown’s Chairman of the Board, got the letter and phoned me, outraged.

The person who ordered that letter once again underestimated me. I assumed character assassination so my references were impeccable and all my contractual information was forwarded to Motown’s business affairs long before DC tried that shit.

Included was my release from Milestone. DC never paid a cent on my pay or play, they were in breach. Funny— it may have worked if they had not made my wife cry.

Why would DC and Milestone and kill my new deal if they wanted me gone?

Warner Bros. got wind of my Motown deal and sent a scathing letter to DC berating them for allowing me to set up a competing comic book company. After getting that rammed up his ass the power that was had to do something.

Let’s be clear CRYSTAL CLEAR. Yes, I just wrote that DC Comics tried to illegally prevent me from taking a position at Motown because of a directive from Warner Bros.

That’s slander if I can’t prove it. Think I’m worried?

Wondering why I won’t out by name the people at DC who disliked me so? What’s the point? They will never respond to anything, there is no upside for them to do so, and frankly, I’m not a cruel person.

Here’s the rub. I wasn’t going to do a comic book line. My deal was to develop film and television, but then someone at DC had to go and fuck with me. They put themselves in the position WB was pissed about.

DC is a different company now. I bear them no ill will. They were and still are my favorite universe.

Reggie Hudlin, Denys Cowan, Derek Dingle and myself decide to honor Milestone’s greatest partner Dwayne McDuffie and relaunch Milestone. On a late February evening Milestone, 2.0 (M2.0) was born. That date is crucial, and not just because of the partnership.

Milestone 2.1 announced to the world.  Milestone is back!  One of if not the biggest comic book stories of 2015.

I find out on that day I was no longer a part of it.

Since then, little has been heard. No press, interviews and no books.

That said, here’s my two-cent conclusion.

Milestone 2.0, in my opinion, is dead for four reasons.