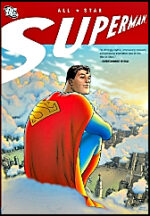 Thanks so much for responding to me! Action Files seems like a great program for schools. I’ll be sure to look into it more. With the new Common Core Standards, I’ve noticed that there isn’t really any standards related to the content of what needs to be taught in an English course and that it mostly revolves around “can students read and write?”

With that in mind, I created a Donors Choose to teach Grant Morrison’s All-Star Superman to my high school seniors. I was given four months to raise the money and I did it in 13 hours. As long as curriculum revolves around analyzing literature and understanding tone and purpose, the state doesn’t really seem to care what they’re being taught. In a way, that’s great because it opens up content, but in another way it’s strange because the field is wide open.

If there is anything I can do to help from the perspective of an educator please let me know. I confess that I don’t know how much help I can be given how much research you’ve done already on your end, but anything I can do, I’d be happy to.

Thanks again for your articles on Bleeding Cool. They’re exceptionally fascinating and insightful. And (though I know you don’t need my advice or insight on this either) ignore all the haters. They’re jackasses anyway. You’re all kinds of awesome.

I’ve received cool letters over the years but this is one of if not the coolest letter I’ve ever gotten. It’s funny I just realized the fan mail I get comes from an eclectic group of people.

Over the years people have written me about things I’ve done in comics or some other media but I do so little published work in the comics creative space I still marvel when someone says they like my work.

Denys Cowan in his career I’m sure has thousands of letters of fan letters. How do I know this? I was in his studio once when he got one. “What’s that?” I asked.

“Fan letter. I get them all the time.”

“Define all the time.”

I let the matter drop knowing he was clearly setting me up when he opened up a file draw thick with documents and placed the new letter in. I wasn’t taking the bait.

I on the other hand have hundreds, maybe a bit over a thousand fan letters but I’m counting every singe letter I’ve gotten that praised me for something or the other.

Just wanted to let you know you rocked my world last night. That was the best three minutes I’ve ever had in my life!

From all my fan letters I can tell you exactly how many were comic book art related.

One hundred seventy-one, of which one hundred fifty-eight were from France and no I’m not kidding.

It seems the French really loved the series I illustrated for the DC mature reader imprint, Piranha Press. I couple of people liked Shado (Stevie Wonder was one) and I got a really nice letter for a painted Green Hornet cover done for Now Comics as well as another painting I did for Now based on the book ‘The Time Machine.’

Most of the fan letters I get are from grade school kids I’ve spoken to, high schools, universities or organizations I’ve lectured at, young artists, educators, parents and some partridges in pear trees.

My absolute favorite letters to get are from young artist I’ve reached (just got a wonderful one from Allison Leung a major talent you will be seeing more from) and educators.

Oh. Did you perhaps think I was going to say grade school kids was my favorite?

Really? Don’t you know by now I’m not one to play to the crowd?

Darn.I am talking about kids here and people lose their minds when they think you are somehow anti-kid when you tell the truth about way receiving letters from grade school kids is not your favorite thing in the whole wide world. You think those haters will give nary a thought to all the good work I’ve for kids?

No. Those simians will lose their minds and call Chris Hanson! The backlash will be terrible…

OK. I know what to do. I’m so glad I like to write my thoughts down then erase them. Can you imagine what the fallout would be if those hairless monkeys saw this?

My absolute favorite letters to get are from young artists I’ve reached (just got a wonderful one from Allison Leung, a major talent you will be seeing more from) and grade school kids!

It’s so great when a 4th grader writes me a letter telling me how wonderful my visit was and it’s just amazing that 30 kids had the same idea at the same time and all 30 letters came in one envelope!

Wow. If kids were not just the most precious things in all creation I’d think that someone put them up to writing those letters. Not that it would lessen the intent, mind you.

I guess if I had to choose (way way way behind) the second most favorite letter I like receiving would be from educators.

Teachers take a no nonsense approach to what’s right for their students. The letter I received from Cody Walker warmed my kid loving heart in many reasons.

Chief among those reasons is this. Cody is teacher who had the guts to create a high school reading program from comic books.

Think about that for a hot sec. It’s very likely his idea was not met with universal love from all his educational peers. Some may even have voiced opposition or even worse not voiced support.

I have no doubt in my mind if faced with a parent teacher revolt against comics in the classroom so fierce all the major networks would have 24/7 news coverage (except Fox News – they would continue their 24/7 reporting of Obama and the allegations he shot Lincoln) Cody would fight the good fight and win.

I know this because Cody took the time and effort to create and find funding for the program (in record time), which he did not have to do.

Teachers like Cody are not rare. They are plentiful. Most teachers labor countless hours not paid for to come up with other ways to engage their students.

Like I said: teachers like Cody are not rare, what’s rare is recognition for great work done on behalf our young people.

On the sporadic occasion when recognition is granted to a well deserving teacher that acknowledgment is slow in coming.

Cody, I’m a fan of yours, my friend. Many (but not nearly enough) thanks for doing what you do.