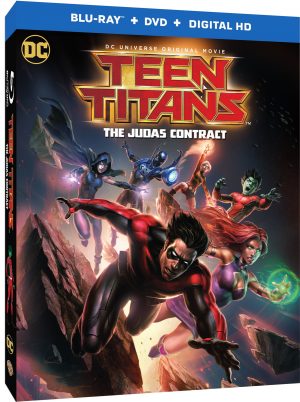 Condensing nearly eighty years of comics continuity, characters, and interpretations into other media allows for cherry-picking and revision to be done, so the resulting new work has the look and feel of the original while offering up something fresh, and hopefully, good.

One of the best-regarded storylines in DC’s history is “The Judas Contract” which was the culmination of a two year thread in New Teen Titans because no one saw the twists and turns in the storyline while it also dramatically shifted Dick Grayson’s status quo. It also provided readers with the origin of the Tiran’s great foe, Deathstroke. The ending was emotional and strong while the entire story holds up on rereading.

What is offered up in Teen Titans: The Judas Contract animated feature, out now from Warner Home Entertainment, is a pale comparison for a number of reasons. First, the lineup of characters is substantially different so the bonds of friendship are different. We open with a flashback to the original Titans (more or less) showing their ease with one another, their trust and teamwork. It nicely introduces Starfire and shows her immediate connection with Robin. Then we move five years into the Animated Universe continuity and we have the current Titans: Starfire (Kari Wahlgren), Robin (Stuart Allan), Beast Boy (Brandon Soo Hoo), Raven (Taissa Farmiga), Blue Beetle (Jake T. Austin), and Terra (an excellent Christina Ricci). There is little explanation of when Terra joined the team, but in the comics, she was around for quite some time before betraying the team.

In the comics, Deathstroke was hired by H.I.V.E. to destroy the Titans and manipulated Tara Markov, a sociopathic teen exiled from Markovia, to be his mole. He played the long game, getting her deep with the team’s trust, even initiating a romance with Changeling (Beast Boy), before having her deliver them to his grasp. She wound up sacrificing herself to save the team, a noble final act.

In the animated film, this is a much more condensed story, with lots of character threads that are under-deserved while the comics’ concurrent Brother Blood (Gregg Henry) story was given way too much play here. Ernie Altbacker, who did a great job on Justice League Dark, has a tough job in adapting the story for film and by using Brother Blood and his cult, serves up nonsensical action in lieu of the real emotional core. Terra’s introduction to the Tians is skipped over while flashbacks show a vastly different origin than the comics, a cliched one at that. 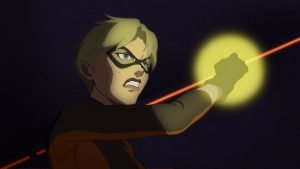 Terra’s romance with Beast Boy comes too late in the story and doesn’t have the same deep resonance it had in the comics, the same with Deathstroke’s uncomfortable sexual relationship with Terra. In the film, he is colder towards her, redeemed only by Miguel Ferrer’s strong (and sadly, final) performance as Slade Wilson. I still dislike how Deathstroke was appended to the League of Assassins in these films since it makes little sense and wish they’d move past that.

Blood’s device, designed to drain the Titans’ powers into him, transforming him into a god, is perhaps the weakest part of the story and an illogical one since Beetle’s alien tech or Raven’s supernatural force cannot easily be captured and transferred.

Where Altbacker excels, is with the evolving relationship between Starfire and Nightwing (Sean Maher) as they move in together at the same time she is jealous with his easy rapport with the team he no longer leads. The other character subplots – notably Beetle’s tense relationship with his father – could have been stronger. At least this film runs longer than most, clocking in at 85 minutes, allowing even this much characterization. His use of Damian is an excellent addition although he’s off the gird for a long stretch in the middle, as if Altbacker couldn’t figure out what to do with him. 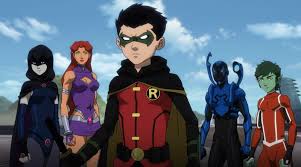 Long-time fans will recognize Jericho in an early scene and we’re rewarded with a hint of things to come with a post-credits scene. Similarly, Wonder Girl is seen at the end, and should be showcased whenever the Titans turn up next.

Overall, if you take the film as the latest installment in the shared animated universe, it’s a strong entry. As an adaptation of this cherished comics tale, it falls woefully short. The film can be found in a variety of formats, of course, including a nifty gift set complete with Blu-ray, DVD, Digital HD code, and a Blue Beetle figure.

The Blu-ray comes with a 28-minute chat between New Teen Titans co-creators Marv Wolfman and George Pérez which shows their easy camaraderie. Marv brought along some nifty artifacts enhancing the video.

Less interesting is the Villains United—Deathstroke (9:00), with Wolfman, Pérez, and Mike Carlin talking about Slade Wilson’s evolution and place in the pantheon of great antagonists.

There’s a fun Sneak Peek for the next offering, the stand-alone Batman and Harley Quinn with the return of Bruce Timm to the team. Rounding out the video are two thematically-related episodes from the DC Comics Vault: “Terra” and “Titan Rising”, both from Teen Titans.