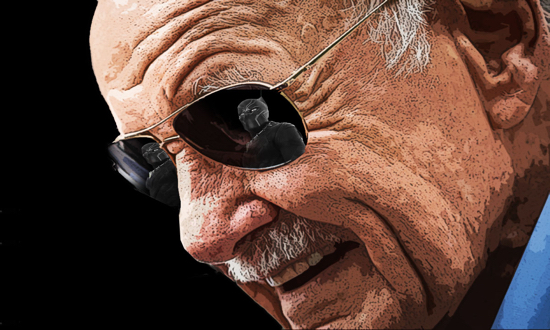 No Sex On The Good Ship Lollipop, part 3

From our last installment…

The Los Angeles neighborhood of Westwood is home to The University of Southern California, better known as U.C.L.A. It’s a trendy area filled with upscale shops and expensive restaurants.

Stan was kind enough to bring with him Jack Kirby… and the Black Panther.

Together the three may have saved my ass.

Showtime Networks and Marvel Productions were both housed in the same Westwood high-rise. I was just moving into my new offices at Showtime; helping me do so was Adah Glenn.

Adah is a fantastic artist I met some years before. She used her considerable wits to land herself a gig at Motown Animation when I was not hiring. That I assure you is no easy feat.

Adah was placing a box on my desk with one small problem. She missed the casually.

Crash!!! The unmistakable sound of breaking glass when the box hit the floor filled the room.

“I hope that wasn’t my Tiffany lamp,” I said.

“I think I just saw Stan Lee in the lobby” she said, not hearing or not caring about my statement. I gazed over to the box then to her. I did that repeatedly knowing she would get the hint and pick up the box.

She didn’t get the hint.

Instead, she looked at me with no indication whatsoever she’d dropped the box.

“I wish I’d thought of something to say to him. Do you know Stan Lee?” she asked.

Flipping my eyes back and forth as fast as I could I told her; “Yep.”

Nothing. It was like the girl was in a trance, and I’d had enough.

“Ya wanna pick up that box you dropped?”

She looked down and was surprised to see the box at her feet.

I’d met Stan as a fan in the 80s. Although it was a while before we became friends, it was memorable when it happened. I saw Stan walking across the San Diego Comic Con Convention floor in 1993, the first year Milestone had a booth.

Stan, much to my surprise, came over. “What do I win?” He said with a huge smile. The Milestone partners all scampered over and said hello to Stan who gave Denys Cowan a “There he is.” When shaking Denys’ hand acknowledging to all there he and Denys knew each other. That made Denys BMOC (big man on campus) and HNIC (ask a black person) for a bit.

That is until Derek Dingle asked Stan “How do you know Michael?” Before he answered I chimed in with “Stan and I were in the Crips together.” Stan co-signed with; “Those were the days.”

Those were the days indeed.

Stan and I had just done a drive by when we decided to ditch the car and ran into the woods. It was dark as such we were taking care not to make any noise less so we were not discovered. At one point Stan whispered “Something just landed on me.”

It took my eyes a second to adjust to the darkness, but once it did I saw what it was and informed Stan; “It’s a spider…man.”

That’s when I created Spider-Man, but Stan will never acknowledge that or his illegitimate son Spike.

That’s how I opened the Stan Lee Roast at a 1994 convention event. By that time Stan and I were on a friendly basis. In 1995 Stan was kind enough to come by the Motown Animation booth at SDCC to wish me well and take some photos.

“You drive that thing on the street?” Stan asked as we stood in front of the Motown / Image Comics Van. The way he asked the question was so funny I couldn’t answer from laughing so much.

Stan and I talked about our history among a great many things over lunch, but mostly we talked about my new venture at Viacom. Since the deal closed the feeling I had made a major blunder was growing. “I gave up my golden parachute to follow a dream, and I’m beginning to think it was a mistake.” I said to Stan.

I told Stan about the comic book reading program.

“It’s a great idea. I should know because I did it when I was in the army,” Stan said. Then he told me how he produced the line of instructional comic books for the armed forces. Years later when at Marvel he tried to get comics in the school system but couldn’t crack that market.

I was convinced he told me that to make me feel better. He assured me he was serious and explained how it was a big deal to get into the schools.

He told me following a dream is rare for most people and said my dream was a noble one because it involved making something to benefit others namely kids with problems reading.

“You unquestionably helped a million kids with a problem reading I’m sure. You certainly helped me.” I told Stan that and how in the fourth grade he and Jack Kirby almost made me kill Ronnie Williams when I slammed a metal backed chair over his head.

“Why on earth did you do that?” Stan inquired through his huge grin. I explained how Ronnie took my copy of Fantastic Four # 73 and I wanted it back. Jack Kirby and he (and some advice from my mother) gave me the strength to get it back.

I realized this was a good a time as any to tell Stan something else he helped me with, my self-esteem. “Thank you for creating the Black Panther. How much flak did you get back in the day?”

He looked at me for a sec and then said; “Some, but it was the right thing do we thought.”

That may have been the understatement of my comics career. The Black Panther was all my comic book buddies, and I could talk about when we discovered him. Then it was the Falcon, Luke Cage, the Prowler and on and on.

It goes without saying Stan and Jack paved the way for Brotherman and Static, inspiring black creators of today with black heroes from our yesterday. I don’t know any creators of color from my generation who would not give those Lee and Kirby creations at least a nod.

Stan and I made lunch a pretty regular thing while we were both at that Westwood high-rise. Stan moved on launching Stan Lee Media where I almost ended up heading “Stan Lee Kids,” but that’s another story. I moved on not long after Stan left the building.

Stan was right. Comics in the schools were a good idea. My Action Files over twenty years later is still in schools. Some time back they started selling on Amazon (without the Teacher’s Guide), and to my knowledge, the program is still the only curriculum based comic book reading program sold in American schools.

In my mind, Stan has a real place in the history of current black comic characters. Those who don’t think so are welcome to that opinion.

The sheer guts it took to create the Black Panther during the time Jack Kirby, and he did so is enough for me.

They didn’t have to, but they did because ‘it was the right thing to do.’

The last time I saw Stan, it was bittersweet. He was the same old Stan holding court in the lobby of the Marriott. But when I shook his hand and looked into his eyes it was evident my Stan was gone. He didn’t remember me.

“Stan is pushing 100. He can’t remember everything and everybody” I was told this by one of Stan’s entourage who meant well but dropped me even to a deeper sadness. As I started to turn and walk away, this young lady must have seen the grief on my face and touched my arm stopping me.

She said; ” With age, God wipes away many things to lessen our burden. His long life may soon be over that’s not a bad thing he must be exhausted. He may leave us, but he will be at peace.”

Not true, I thought.

Stan will be with us forever.