The Knows Have It, by Dennis O’Neil 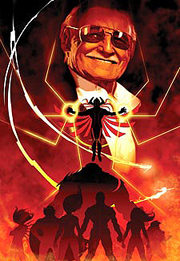 The issue I’m touting, number 18, dated Summer, 2008, is devoted to Stan Lee on his eighty-fifth birthday and it’s full of tributes and reminiscences about the Smilin’ One, who is without doubt the most influential guy in comics. After dozens of pages by others, writers and artists mostly, there is a special treat, headlined: Stan Lee’s Top Ten Tips For Writers. Well, who among us is going to pass that up?

I won’t presume to reproduce all ten of Stan’s tips, but I will give you a condensed version of the first. Herewith:

Okay, we can all accord that an amen. It hearkens back to a subject we explored a few weeks ago, that of the uses of science in science fiction. We agreed, I think, that if a writer is using factual science in a story, said writer should bother to get it right. If the science is not factual, why slow down your pacing by explaining something that doesn’t exist anyway?

Now, allow me to add a modest postscript to Mr. Lee’s wisdom.

Stan’s first sentence – “Write about things you know” – may be familiar to those of you who’ve taken formal creative writing courses. I heard it, years ago, and I always thought it didn’t apply to what I did for a living. I mean, I have to confess that I’ve never, ever waited on a foggy rooftop for a grotesquely deformed madman to approach me with murderous intent. Not even once. But if I’ve never written that particular scene, I’ve written plenty like it.

Yet, the write-what-you-know shibboleth is applicable, in a limited way and maybe at one remove, to the production of the fantasy melodrama us superheroists traffick in. The trick might be to write your own fantasies. If you dream of godlike powers, maybe Superman is your fellah. If you dream of mastering technology, check out Iron Man. If the Atom is your favorite…well, you might have self-esteem issues.

Anyway, I hope you get the idea. A professional ideally ought to be able to do any kind of characterization, provided it doesn’t offend his personal morality, if any. But maybe we do our best work when we’re dealing with good guys who resonate with who we are – who, in one form or another, might rattle around our subconscious even if we didn’t have a Thursday deadline and bills to pay.

Dennis O’Neil is an award-winning editor and writer of Batman, The Question, Iron Man, Green Lantern, Green Arrow, and The Shadow – among others – as well as many novels, stories and articles. The Question: Poisoned Ground, reprinting the second six issues of his classic series with artists Denys Cowan and Rick Magyar, and his novelization of The Dark Knight movie are both on sale right now.