Marc Alan Fishman: Retail Me Not! 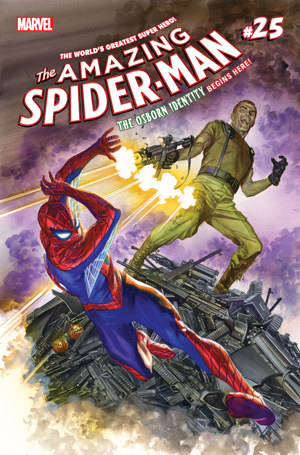 Once again, I have been sought by my good friend and comic retailer Shawn Hilton (of Comics Cubed in Kokomo, IN, don’t-cha-know) to cover a comic cash calamity. Per his post to me:

Amazing Spider-Man #25 from Marvel was originally solicited for $3.99, but now has been changed to a $9.99 price tag.

In the past Marvel has had a few Deadpool comics weighing in at $9.99 for a normal numbered issue. Is this price gauging?

As a retailer who directly benefits from these sales I’m always excited about the potential to bring in more cash to the register, but as a fan I don’t think fondly of these more than double priced issues in the middle of a normal run.

A normal comic buyer may forgo a stand-alone one shot or an annual that has a hefty price tag, but for someone collecting Amazing Spider-Man passing on a normal issue like #25 means missing out on a major part of the story.

I’d also be interested in seeing if this issue has a higher digital theft rate. I don’t know if digital theft is a thing or not, but I bet several people look for a way to read it online instead of forking out $10.00 for a book.

Plenty to cover there, Shawn. Let me preface my opinion with a fact: I am not a comic retailer. I am merely a fan. A fan with a strong opinion muscle, a very short attention span, and a tight wallet. With that in mind, here’s my take:

Is the jump from a four-dollar book to a ten-dollar book price gauging? I don’t think so. If the team on the book is solid, the story benefits from the added pages (assuming the hefty price tag comes with additional content), and the issue itself is significant in the numerology (#25 would assume the book itself is now entering its third year in publication per this volume). If Marvel – or any publisher – doesn’t make it a habit of supersizing their issues without distinct cause, I personally don’t see it as price gouging.

But you better believe that if I were to be a normal subscriber, the week a book more than doubles in price means a week I choose to leave a few books in my box. As was often the case when I regularly subscribed to various series, some weeks would be heavier than others. What I oftentimes would do is simply profess to spend the same amount weekly on my books (say 12-15 bucks, if I recall when I was in the thick of it). If I was subscribing to several Marvel titles, the week they drop a double-sized issue on me is the week I’m dropping something else from my take home bag.

The larger question would be why Marvel, or any publisher for that matter, would make the jump in size. My guess is they only do these supersized treatments on high selling pulp. It makes little sense to deliver a ten-dollar experience on Great Lakes Avengers unless it’s consistently being scooped up in the top twenty monthly titles. Again, this is merely my opinion. As a fan I’m always willing to give the benefit of doubt to the creators. Assuming editorial assigns their creative team a mega-issue, they do so knowing that the writers and artists behind the book can fill the pages with meaningful and worthwhile content.

Should the bigger issue not add to the current storyline ­­– and be peppered with clear filler like interviews, essays, pin-ups, and the like ­– then you’d better believe I’d be an unhappy camper. The Mephisto is in the details, so they say.

What of digital theft? Well, only now do I personally own an iPad that sees regular use. With that in mind, you bet your sweet bippy I’ve downloaded ComicBlitz as well as ComiXology to eventually load up on comics during my lengthy day-job jaunts around the country. Because of the ubiquity of these apps, combined with my being an adult with disposable income, digital theft seems somehow below my purview.

But if I were to put myself back in the more Bohemian mindset of CollegeMarc, the idea that content could be procured sans-capital most certainly would be tempting. I hardly believe if I were otherwise subscribing to a paper title, I would specifically lift a single issue due to a heftier price tag. Simply put, if the book is enjoyable, as a fan, I’m in for a penny and therefore in for the pound.

Ultimately it’s quality of product that determines the bristling of my brow. If a comic book makes me dig deeper into my pocketbook, but delivers a satisfactory punch of prose? Then, drain my bank account. As my long-standing rule over comics continues to apply: when the book goes south, seek refuse in a better book. Should a book more than double its price but not deliver a worthy experience? Consider that strikes one and two in this subscriber’s book.

I, as always, open the floor to discussion. Who amongst my readers has a dissenting opinion? Voice it here, loud and proud.