Martin Pasko: You’ve Got Mail! We Just Don’t Know Where It Is… 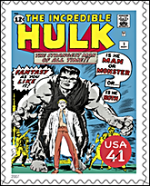 Please believe me, as I conclude last week’s well-reasoned and temperate dissertation on why comics fans should care – maybe – about the future of the US Postal Service, when I say I’m trying hard to wrap up this little opus before the USPS goes out of business.

But I’m not working as fast nor concentrating as well as I’d like because I’ve just been distracted by another “gotcha” courtesy of my BMK – Bad Mail Karma. It illustrates one of the more interesting by-products of the USPS’s ongoing effort to modernize, simplify and streamline its products and services even as Congress calls for a postal austerity program:

When a customer confused by the ever-changing policies (that would be moi) makes a minor mistake, the USPS’s systems will helpfully turn it into an exhausting, nerve-wracking Major Hassle by preventing it from being corrected.

In my recent move back to Southern California, I managed to outsmart myself by sending ahead of me a USPS Priority Mail box of important items that I’d need before the moving van arrived with my everyday stuff. It has yet to arrive, some eight weeks later. It seems I used Priority Mail packaging that was not a flat rate box, but to which I incorrectly affixed flat rate postage generated online. OK, my bad.

That does not explain, however, why it took the P.O. four weeks to determine that that was the problem; why its online tracking system kept giving me information that contradicted the tracking data in the main USPS computer; nor why the package has now crossed the country four times, having been shipped back and forth between my old address and the new, each time being flagged in the system as undeliverable” or sent to “no such address.”

The helpful people I’ve dealt with at my local P.O. – six of them now, because the same people don’t seem to work there for more than five days in a row – can’t seem to figure it out, either. One “Letter Carrier Supervisor” told me, “I’ve been working here 30 years and I’ve never seen anything like this.” Of course, that may be because she apparently takes 147 coffee breaks a day.

This might also explain why she can’t get her direct reports to do what the three other supervisors have told me they will: When the package ricochets back here to Pasadena, they’ll call me so I can come pay the extra postage and pick it up. When last heard from, the package was at some “claims resolution” facility in Atlanta, but was supposed to be on its way back here. That was two weeks ago.

Now, imagine that this box had been, say, a shipment of comics from a private eBay seller for which you were waiting breathlessly. (Yes, small, private sellers often make honest mistakes. I hasten to add, though, that as someone who sells on eBay, I’ve been lucky – so far – not to make this kind of mistake with a customer’s package. And you can be sure I’m doubly careful now.)

This is a microcosmic example of the kind of thing comics fans will probably be saying good-bye to soon, mournfully or otherwise, having been left to the tender mercies of those even bigger screw-ups, UPS and DHL. The macrocosmic version is what I described last week: A stamp-related custom comic project that was extraordinarily successful for DC Comics (the aggregate print run for the nine CTC books I discussed added up to over 10 million) turned out to be a dismal failure for the USPS. This, only because the agency couldn’t secure the content approval from its licensors – the owners of several of the stamp subjects’ IT – in time to get the books out, to serve as collectors’ albums for the CTC series, at the same time as the stamps themselves.

And it’s too bad, really, this suicidal ineptitude, since comics fans once had a friend in the postal service. It was tangentially responsible for the creation of letters columns which, in the earliest days of comics fanzines and well before web sites and comment forums, became the principal means by which comics fans exchanged opinions about talent and continuity developments and, from the addresses printed, gained the means to interact and organize. These “LOC” pages came about because postal regulations required comics to have at least a page of text to qualify for their mailing rate. When the previous practice of hiring writers to create original prose fillers became prohibitively expensive, the “lettercols” were born.

Soon, those who self-identified as serious fans and collectors became the only readers who were so hell-bent on getting their monthly “fix” that they’d be willing to subscribe. But they were dissuaded from doing so because they didn’t want their mint-condition comics given a permanent vertical crease by being folded lengthwise to fit into a narrow wrapper, which was the only cost-effective way to send comics through the mail. So you can thank USPS, then, for killing this in favor of what took another decade to develop, with the growth of specialty retail shops: the pull-and-hold service.

Today, the Postal Service searches for new services it can provide http://www.informationweek.com/government/security/postal-service-pilots-next-gen-authentic/240145559, to replace the ones it has screwed up so badly that they’ve become obsolete. One of its ideas is to get itself into the “identity management business.” The fact that the average citizen can’t figure out what, in fact, “identity management” is should in no way deter the USPS from this worthy goal. It might keep them occupied so that other companies will have to deliver all the packages, and our paychecks will all be issued by Direct Deposit and have no trouble finding their way into our bank accounts.

Of course, thereafter we’ll be unable to access our funds, because our identity will have “managed” to change – to that of someone we’ve never heard of in a zip code that hasn’t been invented yet. (Remind me not to tell you about how my previous address in Pennsylvania, a rural route which was given a normal house-number in “The Monroe County Readdressing Project”  … with the result that my online change-of-address form couldn’t be processed properly because the old address wasn’t in the USPS database.)

Meanwhile, I’ve decided to stop oiling my old spinner-rack and instead donate it to a nursing home. I’m going to shop for comics via ComiXology exclusively, and work on figuring out how to get my new tech for promoting pacifism and conservation of labor, to make plastic staples. Once everyone on eBay is shipping via UPS, and we have the technology to totally recreate “floppies” in our own homes, the world’s Geeks – comic book division – won’t have anything to fear from the P.O. anymore, whatsoever.