Auburn to Celebrate Will Eisner Week 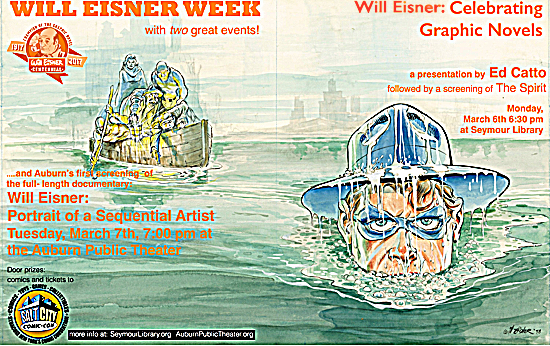 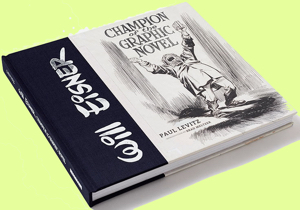 Our pal and ComicMix columnist Ed Catto (also the nicest guy in the Atlantic Northeast) is up to something. Check out this press release!

Explore the life and work of Will Eisner with Auburn, N.Y.’s Seymour Library on Monday March 6th with a panel presentation/film screening and on Tuesday, March 7th with a documentary at Auburn Public Theater.

Will Eisner (1917-2005) was a trailblazer in the comic book world, showing the public that comics could be a genuine form of literature and popularizing the term graphic novel. His landmark comic series The Spirit (1940-1952) was noted for its expressive artwork and experiments in content and form. This year marks the centennial of Will Eisner’s birth. 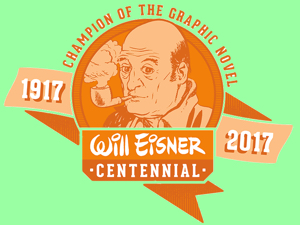 Geek Culture expert Ed Catto will host a panel on Will Eisner: Celebrating Graphic Novels: An Appreciation of Comics as Literature at Seymour Library on Monday, March 6th at 6:30 pm. The panel will provide an overview of Eisner’s work and highlight other graphic novels that demonstrate the enduring power of Eisner’s convictions. There will be a screening of the 2008 film adaptation of Eisner’s The Spirit, after the panel.

The documentary Will Eisner: Portrait of a Sequential Artist will be held at the Auburn Public Theater on Tuesday, March 7th at 7 pm.  Ed Catto will introduce the documentary. 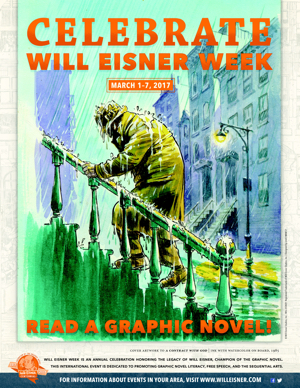 Industry support for this event has been strong:

Ed Catto is a marketing strategist and speaks frequently on Geek Culture and Comic Book History.

“Auburn, N.Y. has a rich, but checkered comic history. In 1948 Auburn held a comic book burning, as part of the anti-comics hysteria of the day. But by the seventies, one of the first comic shops was established in Auburn,” said Catto.

More information about Will Eisner Week in Auburn can be found at the  Seymour Library website: www.seymourlibrary.org.